48: An Experiential Memoir on Homelessness (Paperback) 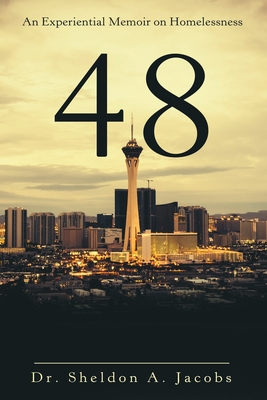 Dr. Sheldon A. Jacobs, a licensed marriage and family therapist who is an advocate for the homeless, was alarmed by the growing problem of homelessness in his Las Vegas community.

On his daily route to and from work, he'd see scores of homeless individuals camped out on sidewalks. Despite his regular efforts to provide hygiene kits, water, and sometimes food to those in need, he still felt a strong sense of hopelessness. He wanted to do something that would be impactful, but he did not know what that would entail.

One day, he crossed paths with a homeless woman at the gym and was inspired to pursue a radical plan: He would go undercover as a homeless man for forty-eight hours.

His wife thought he was crazy and was concerned for his safety, but he courageously pushed forward.

Join the author as he reveals what he learned begging for money in the desert while trying to raise awareness of homelessness.

Dr. Sheldon A. Jacobs, born and raised in Southern California, lives in Las Vegas, Nevada, with his beautiful wife, Nicole; his son, Jayden; and his daughter, Arianna. He is a licensed marriage and family therapist and an advocate for the homeless and those struggling with mental health issues. He has taught numerous courses at the university level, published articles on topics ranging from mental health to various social issues, and is an active practitioner providing individual, couples, family, and group counseling.