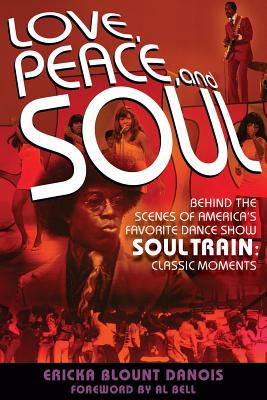 By Ericka Blount Danois
$24.99
Unavailable, Out of Stock, or Out of Print

Love, Peace, and Soul tells the story of the television phenomenon known as Soul Train, a show created in the land of bell bottoms, afros, and soul power; a show that became the touchstone of the Baby Boomer generation. Don Cornelius, host and owner of the show, was one of the coolest cats on television. With his platform shoes, wide neckties, and mellifluous voice, he showed the world just how corny American Bandstand was in comparison. In 2012, fans were shocked to hear one of the most powerful men in the music and television business took his own life. Love, Peace, and Soul is a celebratory, behind-the-scenes collection of anecdotes, stories, and reflections, from the people who were there, about the host, the show, and the power of black music and dance on television. Music and television connoisseurs will enjoy the history of not just Soul Train, but of other shows, including Shindig , Don Kirshner's Rock Concert, Hullabaloo, American Bandstand, and Graffiti Rock. Entrepreneurs will be interested in Cornelius' humble beginnings with the local version of the show in Chicago, created with his own money. Fans will delight in the lively images and the quirky details. The first mass market book on Soul Train since Cornelius's passing, this volume has something for everyone. Includes afterword by Gary Harris.