The Life and Death of Latisha King: A Critical Phenomenology of Transphobia (Sexual Cultures #10) (Hardcover) 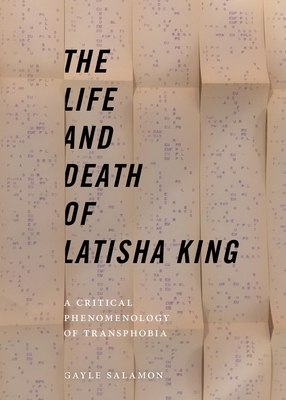 What can the killing of a transgender teen can teach us about the violence of misreading gender identity as sexual identity?

The Life and Death of Latisha King examines a single incident, the shooting of 15-year-old Latisha King by 14-year-old Brian McInerney in their junior high school classroom in Oxnard, California in 2008. The press coverage of the shooting, as well as the criminal trial that followed, referred to Latisha, assigned male at birth, as Larry. Unpacking the consequences of representing the victim as Larry, a gay boy, instead of Latisha, a trans girl, Gayle Salamon draws on the resources of feminist phenomenology to analyze what happened in the school and at the trial that followed. In building on the phenomenological concepts of anonymity and comportment, Salamon considers how gender functions in the social world and the dangers of being denied anonymity as both a particularizing and dehumanizing act.

Salamon offers close readings of the court transcript and the bodily gestures of the participants in the courtroom to illuminate the ways gender and race were both evoked in and expunged from the narrative of the killing. Across court documents and media coverage, Salamon sheds light on the relation between the speakable and unspeakable in the workings of the transphobic imaginary. Interdisciplinary in both scope and method, the book considers the violences visited upon gender-nonconforming bodies that are surveilled and othered, and the contemporary resonances of the Latisha King killing.