Ethnology and Empire: Languages, Literature, and the Making of the North American Borderlands (America and the Long 19th Century #6) (Hardcover) 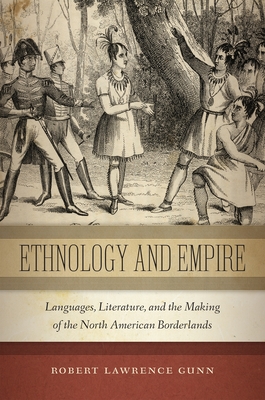 Ethnology and Empire tells stories about words and ideas, and ideas about
words that developed in concert with shifting conceptions about Native peoples
and western spaces in the nineteenth-century United States. Contextualizing the
emergence of Native American linguistics as both a professionalized research
discipline and as popular literary concern of American culture prior to the
U.S.-Mexico War, Robert Lawrence Gunn reveals the manner in
which relays between the developing research practices of ethnology, works of
fiction, autobiography, travel narratives, Native oratory, and sign languages
gave imaginative shape to imperial activity in the western borderlands. In literary and
performative settings that range from the U.S./Mexico borderlands to the Great
Lakes region of Tecumseh's Pan-Indian Confederacy and the hallowed halls of
learned societies in New York and Philadelphia, Ethnology and Empire models
an interdisciplinary approach to networks of peoples, spaces, and communication
practices that transformed the boundaries of U.S. empire through a
transnational and scientific archive. Emphasizing the culturally transformative
impacts western expansionism and Indian Removal, Ethnology and Empire reimagines
U.S. literary and cultural production for future conceptions of hemispheric
American literatures.

Robert Lawrence Gunn is Associate Professor of English at the University of Texas at El Paso.