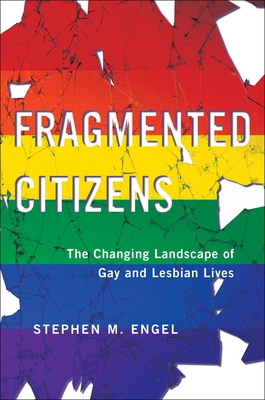 By Stephen M. Engel
This Book Is Not Sold Online - Inquire In Store

The landmark Supreme Court decision in June 2015 legalizing the right to same-sex marriage marked a major victory in gay and lesbian rights in the United States. Once subject to a patchwork of laws granting legal status to same-sex couples in some states and not others, gay and lesbian Americans now enjoy full legal status for their marriages wherever they travel or reside in the country. For many, the Supreme Court's ruling means that gay and lesbian citizens are one step closer to full equality with the rest of America. In Fragmented Citizens, Stephen M. Engel contends that the present moment in gay and lesbian rights in America is indeed one of considerable advancement and change--but that there is still much to be done in shaping American institutions to recognize gays and lesbians as full citizens. With impressive scope and fascinating examples, Engel traces the relationship between gay and lesbian individuals and the government from the late nineteenth century through the present. Engel shows that gays and lesbians are more accurately described as fragmented citizens. Despite the marriage ruling, Engel argues that LGBT Americans still do not have full legal protections against workplace, housing, family, and other kinds of discrimination. There remains a continuing struggle of the state to control the sexuality of gay and lesbian citizens--they continue to be fragmented citizens. Engel argues that understanding the development of the idea of gay and lesbian individuals as 'less-than-whole' citizens can help us make sense of the government's continued resistance to full equality despite massive changes in public opinion. Furthermore, he argues that it was the state's ability to identify and control gay and lesbian citizens that allowed it to develop strong administrative capacities to manage all of its citizens in matters of immigration, labor relations, and even national security. The struggle for gay and lesbian rights, then, affected not only the lives of those seeking equality but also the very nature of American governance itself. Fragmented Citizens is a sweeping historical and political account of how our present-day policy debates around citizenship and equality came to be.

Stephen M. Engel is Associate Professor and Chair of Politics at Bates College in Maine and an Affiliated Scholar of the American Bar oundation. He is the uthor of American Politicians Confront the Courts: Opposition Politics and Changing Responses to judicial Power and The Unfinished Revolution: Social Movement Theory and the Gay and Lesbian movement, as well as co-editor of the volume, The Progressives' Century: Political Reform, Constitutional Government, and the Modern American State.