Mad, Bad, Dangerous to Know: The Fathers of Wilde, Yeats and Joyce (Paperback) 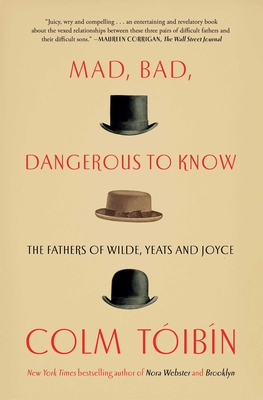 By Colm Toibin
$18.00
Unavailable, Out of Stock, or Out of Print

From the multiple award-winning author of The Master and Brooklyn, an illuminating look at Irish culture, history, and literature through the lives of the fathers of three of Ireland’s greatest writers—Oscar Wilde's father, William Butler Yeats's father, and James Joyce's father—“Thrilling, wise, and resonant, this book aptly unites Tóibín’s novelistic gifts for psychology and emotional nuance with his talents as a reader and critic, in incomparably elegant prose” (The New York Times Book Review).

Colm Tóibín begins his incisive, revelatory Mad, Bad, Dangerous to Know with a walk through the Dublin streets where he went to university and where three Irish literary giants came of age. Oscar Wilde, writing about his relationship with his father stated: “Whenever there is hatred between two people there is bond or brotherhood of some kind…you loathed each other not because you were so different but because you were so alike.” W.B. Yeats wrote of his father, a painter: “It is this infirmity of will which has prevented him from finishing his pictures. The qualities I think necessary to success in art or life seemed to him egotism.” James’s father was perhaps the most quintessentially Irish, widely loved, garrulous, a singer, and drinker with a volatile temper, who drove his son from Ireland.

“An entertaining and revelatory book about the vexed relationships between these three pairs of difficult fathers and their difficult sons” (The Wall Street Journal), Mad, Bad, Dangerous to Know illustrates the surprising ways these fathers surface in the work of their sons. “As charming as [they are] illuminating, these stories of fathers and sons provide a singular look at an extraordi­nary confluence of genius” (Bookpage). Tóibín recounts the resistance to English cultural domination, the birth of modern Irish cultural identity, and the extraordinary contributions of these complex and masterful authors. “This immersive book holds literary scholarship to be a heartfelt, heavenly pursuit” (The Washington Post).

Colm Tóibín is the author of ten novels, including The Magician, winner of the Rathbones Folio Prize; The Master, winner of the Los Angeles Times Book Prize; Brooklyn, winner of the Costa Book Award; The Testament of Mary; and Nora Webster, as well as two story collections and several books of criticism. He is the Irene and Sidney B. Silverman Professor of the Humanities at Columbia University and has been named as the Laureate for Irish Fiction for 2022–2024 by the Arts Council of Ireland. Three times shortlisted for the Booker Prize, Tóibín lives in Dublin and New York.

“Wise and resonant...Toibin presents an evocative, engaging portrait not only of ‘three prodigal fathers,’ as he calls them, but of Dublin in the 19th and early 20th centuries as ‘a place of isolated individuals, its aura shapeless in some way, a place hidden from itself, mysterious and melancholy.’”
—Gregory Cowles, New York Times Book Review

"A vivid and knowledgeable depiction of nineteenth-century cultural life in the Irish capital…Tóibín portrays three giants of Irish literature and their city in a new and clarifying light.”
—Booklist, (starred review)

“Despite the focus on fathers, the works of the sons pervade this book, and Tóibín illuminates them with fresh readings…this study balances dexterous narration and Tóibín’s scholarly familiarity with his subjects’ place in Irish political and social history.”
—Publishers Weekly

"Juicy, wry and compelling... an entertaining and revelatory little book about the vexed relationships between these three pairs of difficult fathers and their difficult sons.”
—Maureen Corrigan, The Wall Street Journal

“Both odd and wonderful…you will be…evocatively entertained, especially if you fancy Dublin, as Tóibín clearly does…Dublin’s streets, pubs, libraries and shops, for Tóibín, are lively with ghosts.”
—Claude Peck, The Minneapolis Star Tribune

"These famous men and the fathers who helped shape them come alive in Tóibín's retelling, as do Dublin’s colorful inhabitants.”
—Esquire