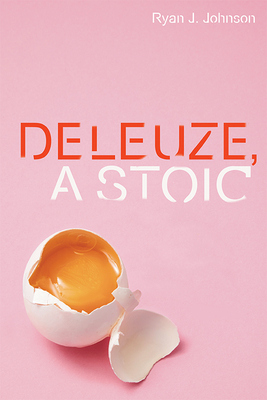 Deleuze dramatises the story of ancient philosophy as a rivalry of four types of thinkers: the subverting pre-Socratics, the ascending Plato, the interiorising Aristotle and the perverting Stoics. Deleuze assigns the Stoics a privileged place because they introduced a new orientation for thinking and living that turns the whole story of philosophy inside out. Ryan Johnson reveals Deleuze's provocative reading of ancient Stoicism produced many of his most singular and powerful ideas. For Deleuze, the Stoics were innovators of an entire system of philosophy which they structured like an egg. Johnson structures his book in this way: Part I looks at physics (the yolk), Part II is logic (the shell) and Part III covers ethics (the albumen). Including previously untranslated French Stoic scholarship, Johnson unearths new possibilities for bridging contemporary and ancient philosophy.

Ryan J. Johnson is Associate Professor of Philosophy at Elon University in North Carolina. He is the author of Deleuze, A Stoic (Edinburgh University Press, 2020) and The Deleuze-Lucretius Encounter (EUP, 2017). He is co-editor of Nietzsche and Epicurus (Bloomsbury, 2020), Contemporary Encounters with Ancient Metaphysics (EUP, 2017) and The Movement of Nothingness (Davies Group Publishers, 2012).