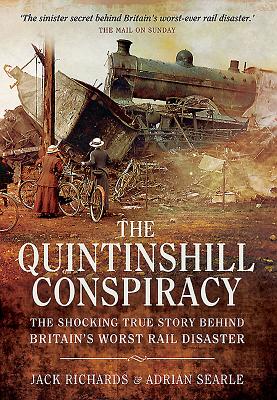 By Jack Anthony Richards, Adrian Searle
$24.95
Unavailable, Out of Stock, or Out of Print

It was the railway's Titanic. An horrific crash involving five trains in which 226 died and 246 were injured, it remains the worst disaster in the long history of Britain's rail network.The location was the isolated signal box at Quintinshill, on the Anglo-Scottish border near Gretna; the date, 22 May 1915, Most of the casualties were Scottish soldiers on their way to fight in the Gallipoli campaign. Territorials setting off for war on a distant battlefield, they were cut down instead on home soil victims, it was said, of serious incompetence and a shoddy regard for procedure in the signal box, Two signalmen were sent to prison. But startling new evidence reveals that the failures which led to the disaster were far more complex and wide-reaching than signaling negligence. The Quintinshill Conspiracy The Shocking True Story Behind Britain's Worst Rail Disaster, exposes what really happened and why.