Shrikes of the World (Hardcover) 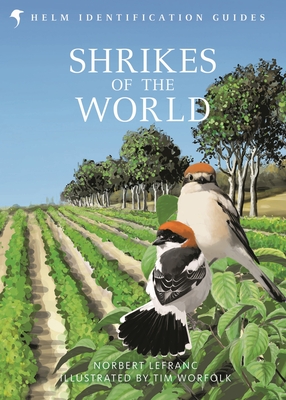 The definitive work on shrikes – a beautiful book that will be treasured by birders and professional ornithologists alike.

Everyone loves shrikes. Beautiful, colourful, often fearless hunters of large insects and small vertebrates, shrikes are among the most prized of all avian groups by birders. And while the one resident species in the UK is now more or less extinct (and the other European species are rare winter visitors), shrikes are common throughout the rest of the northern hemisphere, with a large number of species.

This is a second edition of Norbert Lefranc's Shrikes. It is fully updated from the superb 1997 edition, with detailed maps to accompany the authoritative text, along with hundreds of high-class photos showcasing racial and ageing differences. The exceptional plates are by Tim Worfolk.

Norbert Lefranc is a French ornithologist specialising in the ecology of shrikes. He has travelled all over the world in search of shrikes and other birds, publishing many papers and four books, including Les Pies-grièches d'Europe, d'Afrique du Nord et du Moyen-Orient (1993) and the first edition of the present book (1997). He worked as a biodiversity officer for the Ministry of Ecology in the 'Grand Est'. Now retired, he spends his time contributing to research and conservation actions led by NGOs, particularly by the Société d'Etudes Ornithologiques de France (SEOF) and the Ligue pour la Protection des Oiseaux (LPO/Birdlife France).

Tim Worfolk has been a full-time bird illustrator since 1994 (the original Shrikes was his first commission). His work has appeared in dozens of field guides, handbooks and scientific papers. He has visited many countries in Europe, Asia, Africa and North America in search of shrikes and other birds but, for environmental reasons, has now given up air travel. Since 1999 he has lived by the Exe Estuary in Devon, England where he mostly gets around by bicycle.