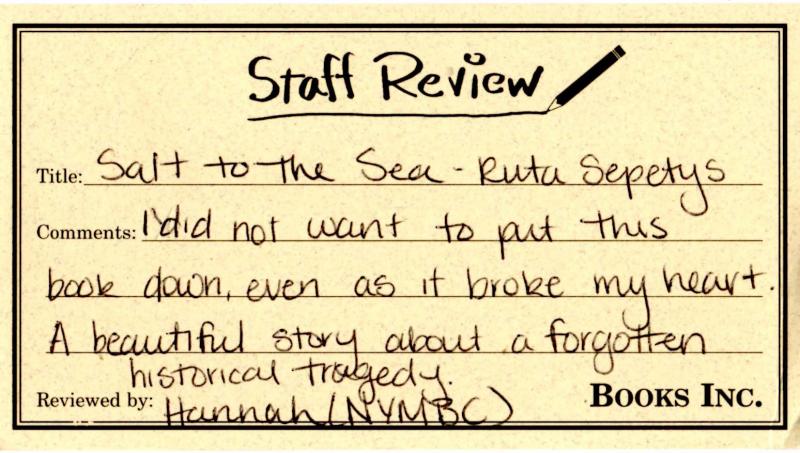 The author of"Between Shades of Gray"returns to WWII in this epic novel that shines a light on one of the war's most devastating yet unknown tragedies.
In 1945, World War II is drawing to a close in East Prussia, and thousands of refugees are on a desperate trek toward freedom, almost all of them with something to hide.Among them areJoana, Emilia, and Florian, whose paths converge en route to theship that promises salvation, the "Wilhelm Gustloff." Forced by circumstance to unite, the three find their strength, courage, and trust in each other testedwith each step closer toward safety.
Just when it seems freedom is within their grasp, tragedy strikes. Notcountry, nor culture, nor status matter as all ten thousand people aboard must fight for the same thing: survival.

Told in alternating points of view, and perfect for fans of Anthony Doerr's Pulitzer Prize-winning "All the Light We Cannot See," Erik Larson's critically acclaimed #1 "New York Times" bestseller"Dead Wake," and Elizabeth Wein's Printz Honor Book"Code Name Verity," this masterful work of historical fiction is inspired by the real-life tragedy that was the sinking of the"Wilhelm Gustloff"--the greatest maritime disaster in history. As she did in"Between Shades of Gray," Ruta Sepetys unearths a shockingly little-known casualty of a gruesome war, and proves that humanity can prevail, even in the darkest of hours.Praise for"Salt to the Sea"
"Ruta Sepetys is a master of historical fiction. In "Salt to the Sea" the hard truths of her herculean research are tempered with effortless, intimatestorytelling, as her warm and human charactersbreathenew life into one of the world's most terrible and neglected tragedies." Elizabeth Wein, "New York Times" bestselling author of Printz Award Honor Book "Code Name Verity"
A rich, page-turning story that brings to vivid life a terrifying and little-known moment in World War II history. Steve Sheinkin, author of Newbery Honor and National Book Award finalist "Bomb"
* "Sepetys excels in shining light on lost chapters of history, and this visceral novel proves a memorable testament to strength and resilience in the face of war and cruelty." "Publishers Weekly, "starred review
"The inevitability of the ending (including the loss of several characters) doesn't change its poignancy, and the short chapters and slowly revealed back stories for each character guarantee the pages keep turning. Heartbreaking, historical, and a little bit hopeful." "Kirkus"
Praise for "Between Shades of Gray"
A"New York Times"Notable Book of 2011
A"Wall Street Journal"Best Children's Book of 2011
A"Publishers Weekly"Best Book of 2011
The iTunes 2011 Rewind Best Teen Novel
A"School Library Journal"Best Book of 2011
A"Booklist"Best Book of 2011
A"Kirkus"Best Book of 2011
2012 Indies Choice Young Adult Book of the Year
A Carnegie Medal Finalist
A William C. Morris Finalist
A"New York Times"Bestseller
An International Bestseller
Few books are beautifully written, fewer still are important; this novel is both. "The Washington Post"
* A harrowing page-turner. "Publishers Weekly," starred review
* A gripping story. "School Library Journal," starred review
* Bitterly sad, fluidly written Sepetys' flowing prose gently carries readers. "Kirkus," starred review
* "Beautifully written and deeply felt an important book that deserves the widest possible readership. Booklist, starred review
Stalin deported and murdered millions, but he could not destroy the seeds of memory, compassion, and art that they left behind. From those seeds, Ruta Septeys has crafted a brilliant story of love and survival that will keep their memory alive for generations to come. Laurie Halse Anderson, bestselling author of"Speak"and"Wintergirls"
In terrifying detail, Ruta Sepetys re-creates World War II coming of age all too timely today. Between Shades of Gray is a document long overdue. Richard Peck, Newbery Award winning author of"A Year Down Yonder"
"Between Shades of Gray" is a story of astonishing force. I feel grateful for a writer like Ruta Sepetys who bravely tells the hard story of what happens to the innocent when world leaders and their minions choose hate and oppression. Beautiful and unforgettable. Susan Campbell Bartoletti, Newbery Honor winning author of"Hitler Youth"

Ruta Sepetys (www.rutasepetys.com) was born and raised in Michigan in a family of artists, readers, and music lovers. She is the award-winning, bestselling author of "Between Shades of Gray" and "Out of the Easy." Ruta lives with her family in Nashville, Tennessee. Follow her on Twitter at @RutaSepetys. "From the Hardcover edition."