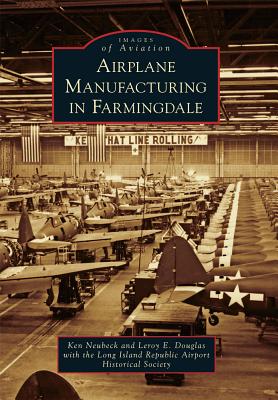 By Ken Neubeck, Leroy E. Douglas, Long Island Republic Airport Historical
$21.99
Unavailable, Out of Stock, or Out of Print

A comprehensive pictorial history of Farmingdale, New York's outstanding aeronautical achievements made by so many talented men and women over seven decades.

Farmingdale, located in west-central Long Island on both sides of the Nassau-Suffolk County border, was an important center of airplane manufacturing from the First World War until almost the end of the Cold War. Aviation pioneers like Lawrence Sperry, Sherman Fairchild, Leroy Grumman, Alexander de Seversky, and Alexander Kartveli directed the manufacture of aircraft, aircraft engines, and key subassemblies as they evolved from the propeller, biplane era to the jet and space age. Farmingdale witnessed the creation of such cutting-edge aircraft as the Sperry Triplane Amphibian and Messenger; the Fairchild FC-2; the Grumman FF-1, JF-1 Duck, and G-22 Gulfhawk; the Seversky P-35; the Republic Aviation P-47, F-84, and F-105; and the Fairchild Republic space shuttle tails and A-10 Warthog. Airplane manufacturing in Farmingdale ended in 1987 with the demise of Fairchild Republic, but its history still lives on today.