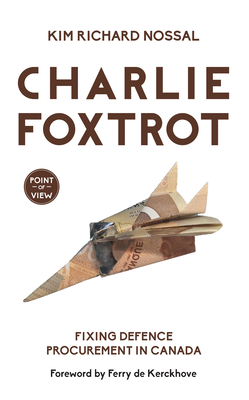 Defence expert Kim Richard Nossal presents a damning indictment of defence procurement in Canada, and shows how to fix it.

Defence procurement in Canada is a mess. New equipment is desperately needed for the Canadian Armed Forces, but most projects are behind schedule, over budget, or both. Not only has mismanagement cost Canadian taxpayers hundreds of millions of dollars, it has also deprived Canada and the CAF of much-needed military capacity.

Successive governments -- both Liberal and Conservative -- have managed the complexities of defence procurement so poorly that it will take years before the Royal Canadian Navy, the Royal Canadian Air Force, and the Canadian Army regain the capabilities they need. While new prime ministers invariably come to power promising to fix problems inherited from their predecessors, getting it right has remained frustratingly elusive.

Charlie Foxtrot offers a fresh take on this important policy issue. It shows why governments have found it so difficult to equip the CAF efficiently, and offers a set of political prescriptions for fixing defence procurement in Canada.

Kim Richard Nossal is a professor of political studies at Queen's University. He is a former editor of International Journal, a former president of the Canadian Political Science Association, and author of a number of works on Canada's foreign and defence policy. From 2006 to 2012, he chaired the academic selection committee of the Security and Defence Forum of the Department of National Defence.