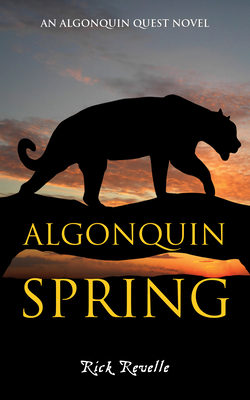 This is book number 2 in the Algonguin Quest Novel series.

Years after a devastating battle, Mahingan and his tribe struggle to recover a lost loved one.

Six years earlier in the fourteenth century, Mahingan and his tribe fought the Battle of the Falls against the Haudenosaunee. There were many losses, and Mahingan thought he had lost his wife, W bananang (Morning Star). But after the battle, he learned she was still alive, taken captive by the Haudenosaunee. Now on a desperate quest to rescue her, Mahingan and his small family are wintering north of the Ottawa River near present-day Lachute, Quebec. If they are to have any hope of recovering W bananang, though, they must first survive until spring.

At the same time, over 2,000 kilometres away in present-day Newfoundland, events taking place will affect four Native tribes: Mahingan's, a group of Mi'kmaq, a Beothuk group, and a band of Haudenosaunee warriors led by Mahingan's old nemesis, nenhste Erhar (Corn Dog) -- a fierce Mohawk War Chief and W bananang's captor.

Along the way, Mahingan's brother, Mitigomij, will reveal his true self and powers. Then, an influential Mi'kmaq legend puts a new, powerful twist on events, and threatens to send things spiraling out of Mahingan's control.

Rick Revelle was born in Smiths Falls, Ontario, and raised the Odessa and Wilton areas. He is a member of the Ardoch Algonquin First Nation. His first book was I Am Algonquin, the first Algonquin Quest novel. He lives in Glenburnie, Ontario.