Doing Canada Proud: The Second Boer War and the Battle of Paardeberg (Canadians at War #8) (Paperback) 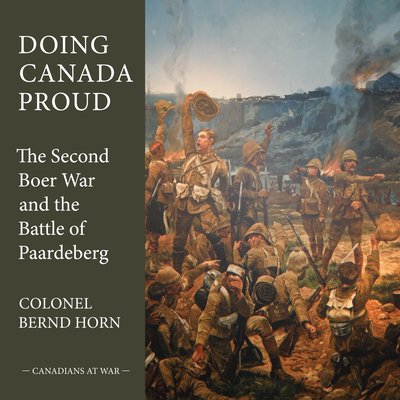 This is book number 8 in the Canadians at War series.

The story of a little-known Canadian victory in the Second Boer War.

In the fall of 1899, Britain entered the Second Anglo-Boer War in South Africa confident that its army would make short work of a collection of armed farmers. However, initial confrontations quickly changed attitudes. Following a series of humiliating defeats, Britain quickly sought additional troops. Canada answered the call, and its first contingent consisted of the 2nd (Special Service) Battalion, The Royal Canadian Regiment (RCR).

Fighting their first battle at Paardeburg Drift from February 18 to 27, 1900, The RCR did Canada proud, serving with distinction and demonstrating endurance and tenacity that rivalled the famous British regulars. This victory came at a cost, though. The RCR suffered 39 killed and 123 wounded, but its accomplishments were impressive. Canadians delivered the first major British triumph, which became the turning point of the conflict. The victory also awakened patriotism and national identity at home and earned Canada recognition as a sovereign power.

Colonel Bernd Horn is an experienced Canadian Forces infantry officer and military educator. Dr. Horn has authored, co-authored, or edited more than 30 books, including Men of Steel and Battle Cries in the Wilderness. He lives in Kingston, Ontario.

On Battle Cries in the Wilderness:
"Battle Cries, which tells the story of this war in North America, is a good history book, well written, historically accurate and interesting. In the author's skilful hands, the reader almost becomes a witness to the struggle."--CM Magazine, February 11, 2012