"Resolution and the Briefest End" Suicide in Shakespeare's Tragedies (Paperback) 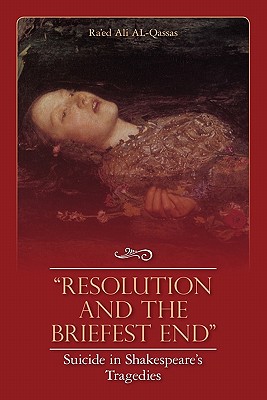 Suicide is fundamental when it comes to characters reaching a state of immortality in Shakespeare's tragedies, and in Resolution and the Briefest End: Suicide in Shakespeare's Tragedies, Ra'ed AL-Qassas studies this theory in great detail. Dedicated to sparking a renewed interest in these plays, and resuscitating a particular tragedy that has been neglected for many years, namely Timon of Athens, he focuses on the psychology of the Shakespearean hero, which brings into play a modern appreciation of the Bard's works. Imprisoned behind university walls, Christopher Marlowe's works have consequently faded away, while Shakespeare's plays are very much alive because of their suicidal content, a component that has always intrigued and fascinated audiences throughout the ages. What makes this book such an interesting read is that the author has detected three patterns of suicide in Hamlet, Macbeth, King Lear, Timon of Athens, Othello, and Julius Caesar, which he classifies as nihilistic, emotional, and redemptive. This thought provoking study presents a new and highly original way of looking at Shakespeare's tragedies. Unique, informative, and worthy of note, this book is both educational and a great pleasure to read.

Ra'ed AL-Qassas was born in Jordan on March 3, 1965. He earned a Masters Degree in English Literature and Criticism from Yarmouk University in 1998. His interest in both psychology and literature, along with his love of Shakespeare, led him to examine the many facets of suicide in the playwright's tragedies. The idea of the book originated through the many discussions with a friend, Yazeed Sha'ban, while he was a student at Delhi University in 1993. Working as an English language teacher for twelve years, the author now lives in Qatar where he is currently writing his second book, Arabs, Jews, and Turks: Aliens in English Renaissance Literature.