Creation or Evolution?: Origin of Species in Light of Science's Limitations and Historical Records (Hardcover) 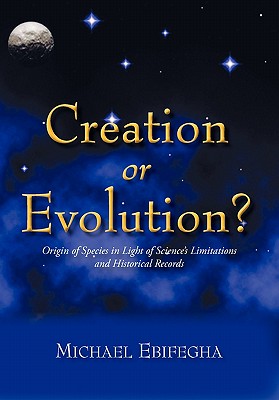 Were humans created, or did they evolve? This debate continues to rage between science and religion. In Creation or Evolution?, author Michael Ebifegah examines these two worldviews within the framework of science..

He examines the constraints of science as an explanatory framework for the origin of species and compares the contemporary world to a hypothetical world under the influence of evolutionary processes and agency. Additionally, he considers the irrelevance of the earth's age to the creationist/evolutionist controversy. He stresses that knowledge of the intersection between the origin of life and the origin of species is required to establish the latter..

Ebifegah augments the natural selection discussion in light of Fodor and Piattelli-Palmarini's work and addresses science's limitations in deploying similarity/dissimilarity arguments in the debate about creationism versus evolutionism. Finally, he focuses on the lack of historical evidence to justify an evolutionary worldview.

Creation or Evolution? discusses how the M-theory and Charles Darwin's paradigm of evolution by natural selection are outside the limits of science. Ebifegah shows that we must look beyond the inadequacy of such theories and address the validity of science as the sole avenue of inquiry.