Fiesta of Sunset: The Peace Corps, Guatemala and a Search for Truth (Paperback) 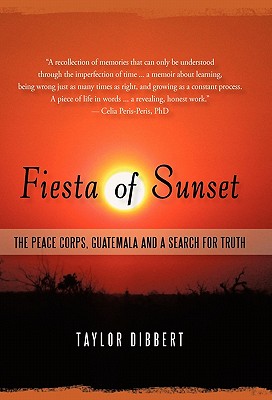 "A recollection of memories that can only be understood through the imperfection of time ... a memoir about learning, being wrong just as many times as right, and growing as a constant process. A piece of life in words ... a revealing, honest work."
- Celia Peris-Peris, PhD

Men who voted for George W. Bush don't fit the mold of your typical Peace Corps volunteer. But Taylor Dibbert isn't your typical anything. Born and raised in Dallas, Dibbert lived far away from the third world countries he saw on the news. Yet something called to him, and so from 2006-2008, Dibbert lived in a small, indigenous village in Guatemala, after unpredictably joining the Peace Corps.

Fiesta of Sunset tells not only of the adventures of a far off land; it also provides a closer look into the back alleys and sad streets of a country struggling with poverty, corruption, crime and more. Some of the mysterious and romantic stereotypes of the Peace Corps are set to rest in this engaging example of one young American's experience abroad and how, while there, he began to learn how mistakes often pave the path to understanding.

Ultimately the Peace Corps is about empowerment, helping the world's poor help themselves. But there's something more that JFK left out of his groundbreaking Peace Corps speech. Personal growth lies at the heart of the volunteer experience. As the Peace Corps celebrates its historic 50th anniversary, this uniquely compelling book reminds us that the organization's mission is more relevant now than ever.