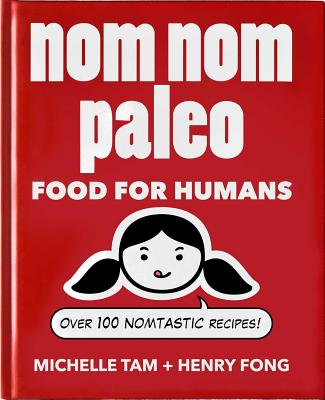 This is book number 1 in the Nom Nom Paleo series.

We love Nom Nom Paleo and Michelle Tam!!! From an offsite launch event on January 4th, 2014.

Nom Nom Paleo is a visual feast, crackling with humor and packed with stunningly photographed step-by-step recipes free of gluten, soy, and added sugar. Designed to inspire the whole family to chow down on healthy, home-cooked meals, this cookbook compiles over 100 foolproof paleo recipes that demonstrate how fun and flavorful cooking with wholesome ingredients can be. And did we mention the cartoons?

Nom Nom Paleo kicks off with a fresh introduction to Paleo eating, taking readers on a guided tour of author Michelle Tam's real-food strategies for stocking the kitchen, saving time, and maximizing flavors while maintaining a Paleo lifestyle. Also, sprinkled throughout the book are enlightening features on feeding kids, packing nutritious lunches, boosting umami, and much more.

There's something for everyone in this cookbook, from small bites like Apple Chips and Kabalagala (Ugandan plantain fritters) to family-sized platters of Coconut Pineapple "Rice" and Siu Yoke (crispy roast pork belly). Crave exotic spices? You won't be able to resist the fragrant aromas of Fast Pho or Mulligatawny Soup. In the mood for down-home comforts? Make some Yankee Pot Roast or Chicken Nuggets drizzled with Lemon Honey Sauce. When a quick weeknight meal is in order, Nom Nom Paleo can show you how to make Crispy Smashed Chicken or Whole-Roasted Branzini in less than 30 minutes. And for a cold treat on a hot day, nothing beats Paleo-diet-friendly Mocha Popsicles or a two-minute Strawberry Banana Ice Cream.

Eating healthy doesn't mean sacrificing flavor. This book gives you "Paleo with personality," and will make you excited to play in the kitchen again.

Michelle Tam is the respected food nerd and working mom behind Nom Nom Paleo, a leading food blog and one of the bestselling and highest-rated iPad® cooking apps of all time. The Kitchn has heralded Michelle’s recipes as “often Asian-influenced, often California-inspired, and always popping with flavor.” In 2012, Saveur Magazine recognized Michelle’s site as the Best Special Diets Food Blog.

Henry Fong is Michelle’s husband and co-conspirator. A lawyer by day and graphic artist by night, he’s responsible for Nom Nom Paleo’s distinctive design and photography, which won a Homies Award from Apartment Therapy for Best Food Photography on a Blog in 2012. Henry is a graduate of the University of California, Berkeley, and Yale Law School. He hates taking out the garbage.

"Nom Nom Paleo Food for Humans clearly describes what the Paleo diet is all about and why it makes sense. As a cook who embraces all diets, and therefore no particular diet beyond fresh cooked food, I love this book for its sound techniques, flavorful pairings, and innovative dishes. There’s also a contagious joyousness about the way Michelle presents food that makes you want to cook along with her. I want to cook Paleo because she makes it look so fun!" (Michael Ruhlman, James Beard Award-winning author of numerous books about food and cooking)

"You can tell from the title that these authors like to nosh, and know how to have fun while they’re at it. This is a delightful read-playful, irreverent, fun-from beginning to end, with easy-to-follow recipes that will inspire anyone wanting to eat a more healthy diet. Thank you, Michelle and Henry, for showing us that eating Paleo doesn’t have to mean eating steak and broccoli every day!" (Elise Bauer, award-winning creator of SimplyRecipes.com)

"...Nom Nom Paleo has made a tremendous splash in the Paleo diet scene, as well as among anyone interested in eating less processed food." (Alison Spiegel, Huffington Post)

"The new cookbook...has one of the best ways of adding umami to foods I've ever encountered...authors Michelle Tam and Henry Fong have given everyone a gift with their recipe for Magic Mushroom Powder." (Grant Butler, The Oregonian)

"This collection of recipes is a bit like the Wild West—the ideas are scattershot but oddly provocative."

"I do appreciate cooks who are able to plunge headfirst into the culinary unknown." (Christopher Kimball, Wall Street Journal)

"I don’t care if you’re a discriminating foodie or a picky tot: If you’re a human who eats food, you need this book. Nom Nom Paleo’s lip-smacking recipes, zany humor, and eye-popping style will prove to you that Paleo won’t just make you look, feel, and perform better - you’ll eat better, too." (Robb Wolf, New York Times bestselling author The Paleo Solution)

"In the playful book, brimming with lighthearted humor and comics, Tam and Fong offer insight into the Paleo lifestyle, reveal tips on how to get started, and share a plethora of tasty, and Paleo-approved recipes." (Lauren Rubin, Relish)

"Nom Nom Paleo: Food for Humans is a cookbook that is JUST PLAIN FUN-It’s packed with creative cartoon graphics, tasty food photos, and yummy recipes that appeal not only to committed Paleo dieters, but to anyone who loves good food." (Bruce Aidells, IACP Award-winning author The Great Meat Cookbook)

"What’s for dinner?” is no longer a stress-inducing conundrum, as Nom Nom Paleo proves that cooking for your family can be easy, healthy, and fun. Featuring delicious recipes and lots of kitchen self-help, this book details step-by-step instructions perfect for the stovetop-challenged, and enough variations to inspire the budding chef. And the photos...oh, the PHOTOS! Worthy of their very own coffee table, the pictures and original illustrations make this unique cookbook perfect for the visual learner." (Melissa Hartwig, New York Times bestselling author It Starts with Food)