Hubert Keller's Souvenirs: Stories and Recipes from My Life (Hardcover) 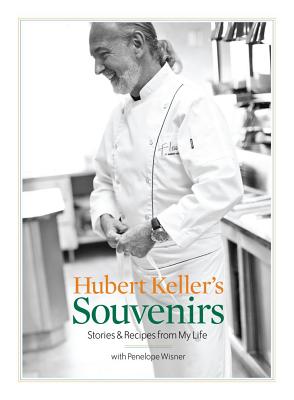 An intimate look at the life of celebrated chef Hubert Keller, through 120 inspiring recipes, personal stories, myriad photographs, and other memorabilia.

Souvenirs is a memoir cookbook written by the multitalented Hubert Keller: chef, restaurateur, and Frenchman. Through personal stories and 120 recipes, the book explores his classical training and traces his development as a creative superstar chef. Keller apprentices in a Michelin three star–rated restaurant at the age of 16. He moves from his native Alsace, to southern France, and is inspired by the cuisine of the sun while working with the great French chefs of his time, Roger Vergé, Paul Bocuse, and Gaston Lenôtre. He learns to adapt to challenging new environments in South America, and the United States, and charts his own path into the newest frontiers of the restaurant business. The book is organized by seminal themes in his life; it starts with his family in France, and ends back there in the “Holiday” chapter. The myriad recipes, which have been adapted for the home cook, are intertwined with 125 of Eric Wolfinger's luscious images of family and friends, food and cuisine, and the places and landscapes of France, Las Vegas, and San Francisco, which all make up chef Keller’s life.

Hubert Keller is known best for his world-renowned restaurants, Fleur de Lys (San Francisco, California),Â Fleur by HubertKeller (Las Vegas, Nevada), and Burger Bar (San Francisco, Las Vegas, and St. Louis, Missouri). His imaginative, modern French cuisine has received numerous awards, and he is regarded as one of America's most talented chefs. His influence extends beyond his restaurant kitchens to the millions of people he reaches through his cookbooks and media appearances, including his own Secrets of a Chefcooking show (PBS), and Top Chef,Top Chef Masters, Top Chef All-Stars, and Top Chef Just Desserts (Bravo).

Growing up in Ribeauville, Alsace, France, Chef Keller's passion for the culinary arts ignited early. By 16, Chef Keller knew he wanted to become a professional, and worked as an apprentice under some of the greatest French chefs---Paul Haeberlin, Gaston Lenotre, Paul Bocuse, and Roger Verge. For nearly 10 years, he worked throughout France and South America. In 1982, Verge sent him to San Francisco, to open Sutter 500. In 1986, Chef Keller partnered with his wife and Maurice Rouas to become the chef/owner of Fleur de Lys, which quickly became known as one of the best restaurants in the country.

In 2004, Chef Keller was invited by Mandalay Bay to Las Vegas to re-create his San Francisco Fleur de Lys. The partnership also resulted in the first Burger Bar in 2004. A second Burger Bar opened in 2007, in Lumiere Place Casino & Hotels in St. Louis. A third Burger Bar opened in 2009, on the sixth floor of Macy's Union Square in San Francisco. More Burger Bars are on the drawing board. Keller, sensitive to the changing tastes of the Las Vegas dining public, reimagined his original restaurant and, in 2010, created Fleur by Hubert Keller, a small-plates restaurant featuring tastes from around the world.

Chef Keller is internationally known for his innovation and creativity and has long been considered a "chefâ€™s chef". He has won numerous awards, including the James Beard Foundation's Best Chef:California, and has been elected to the foundation's prestigious Who's Who of Food and Beverage. Food & Wine magazine tapped him as one of the TopÂ Ten Chefs in America, and Restaurants & Institutions gave him its Ivy Award. Chef Keller has cooked for several U.S. presidents and was the first guest chef invited to the White House to personally prepare his sophisticated, healthy menus for President ClintonÂ and his family. Chef Keller is also known for his performance as a judge on Top Chef, as well as for his grace-under-pressure performance as a contestant in the first season of Top Chef Masterson Bravo. His relationship with the Top Chef franchise continued in 2011, particularly as a judge on Top Chef Just Desserts. He appears frequently in the media, including appearances on Today andÂ Live! withÂ Regis and KellyÂ on NBC; Rachel Ray ShowÂ and Good Morning America, as well as a new reality show, The Big Time,Â on ABC;Â The Real Housewives of Orange County on Bravo;plus the Travel Channel, the FoodNetwork, and Fox TV. The third season of Chef Keller's Secrets of a Chef, produced by Marjorie Poore Productions and sponsored by Cuisinart, began airing in the fall of 2011.

A truly original cuisine featuring contemporary French cooking with Mediterranean accents has emerged from Keller's rich and varied career. He observes classic French principles and maintains a California-style commitment to health while incorporating the culinary traditions of Alsace, Brazil, and San Francisco. Accordingly, he pioneered a six-course vegetarian menu for Fleur de Lys, making it the first fine-dining American restaurant to offer this option. His healthful cuisine led Dr. Dean Ornish, the esteemed cardiologist, to ask Keller to contribute recipes to Dr. Ornish's best-selling cookbook, Eat More, Weigh Less. Keller is also known for his generosity and support for a wide range of educational, charitable, and community events around the country, including PBS, Make-A-Wish Foundation, Taste of the Nation, and Share Our Strength.

Penelope Wisner is a San Francisco, California-based freelance writer, cooking teacher, and kitchen coach. She has pursued her love of the pleasures of the table from magazine editing in New York City, to working grape harvests around the world. Her book credits include Summer Cocktails; Flavored Vinegars, Flavored Oils, and The Tra Vigne Cookbook with Michael Chiarello; La Parilla with Reed Hearon; The Basque Kitchen with Gerald and Cameron Hirigoyen; Modern Asian Flavors for Richard Wong; and Burger Bar with Hubert Keller.