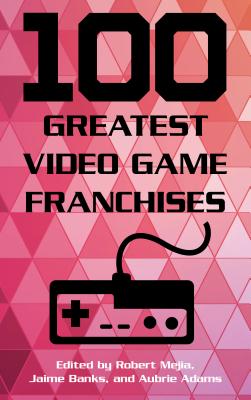 Video games take players on a trip through ancient battlefields, to mythic worlds, and across galaxies. They provide players with a way to try on new identities and acquire vast superpowers. Video games also give people the chance to hit reset - to play again and again until they achieve a desired outcome. Their popularity has enabled them to grow far beyond their humble origins and to permeate other forms of popular culture, from comic books and graphic novels to films and television programs. Video games are universal. In 100 Greatest Video Game Franchises, editors Robert Mejia, Jaime Banks, and Aubrie Adams have assembled essays that identify, assess, and reveal the most important video games of all-time. Each entry makes a case for the game's cultural significance and why it deserves to be on the list, from its influence on other games to its impact on an international scale. In addition to providing information about the game developer and when the franchise was established, these entries explore the connections between the different video games, examining them across genre, theme, and content. This accessible collection of essays gives readers an opportunity to gauge their favorite video game franchises against the best of all time and argue how they each fit among the 100 greatest ever created. Whether casually looking up information on these games or eager to learn how franchises evolved over the years, readers will enjoy this entertaining and informative volume. Comprehensive and engaging, 100 Greatest Video Game Franchises will appeal to fans and scholars alike.

Robert Mejia is assistant professor at the North Dakota State University and is a founding member of the National Communication Association's Game Studies Division. He is the author of multiple journal articles and book chapters on the political, economic, and cultural significance of the video game industry. Jaime Banks is assistant professor in the Department of Communication Studies at West Virginia University, research associate at WVU's Interaction Lab, and currently serves as the founding Chair of the Game Studies Division of the National Communication Association. She has authored book chapters and journal articles in such publications as New Media & Society, International Journal of Technology and Human Interaction, and Journal of Gaming & Virtual Worlds. Aubrie Adams is a doctoral student in the Department of Communication at the University of California, Santa Barbara.