An Unprecedented Election: Media, Communication, and the Electorate in the 2016 Campaign (Hardcover) 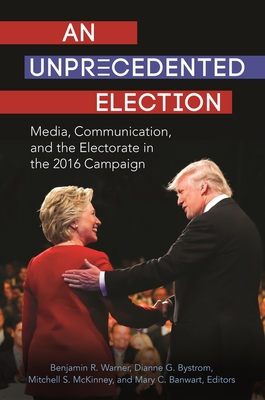 The political events leading up to election day on November 8, 2016, involved unprecedented events in U.S. history: Hillary Clinton was the first female to be nominated by a major party, and she was favored to win the highest seat in the nation. Donald Trump, arguably one of the most unconventional and most-unlikely-to-succeed candidates in U.S. history, became the leading candidate against Clinton. Then, an even more surprising thing happened: Trump won, an outcome unexpected by all experts and statistical models.

An Unprecedented Election: Media, Communication, and the Electorate in the 2016 Campaign presents proprietary research conducted by a national election team and leading scholars in political communication and documents the most significant--and in some cases, the most shocking--features of the 2016 U.S. presidential election. The information presented in this book is derived from national surveys, experiments, and textual analysis, and it will help readers to grasp the truly unique characteristics of this campaign that make it unlike any other in U.S. history. The chapters explain the underlying dynamics of this astonishing election by assessing the important role of both traditional and social media, the evolving (and potentially diminishing) influence of televised campaign advertisements, the various implications of three historic presidential debates, and the contextual significance of convention addresses. Readers will come away with an appreciation of the content and effects of the campaign communication and media coverage as well as the unique attributes of the electorate that ultimately selected Donald Trump as the 45th president of the United States.