Apples and the Fallen Idols: When Americans Invaded the Canadas A Boy Defined Courage (Hardcover) 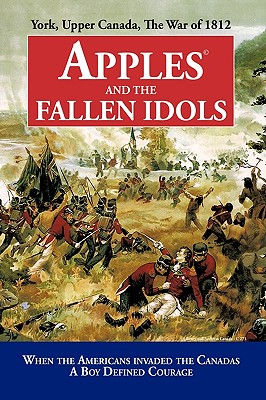 When his mother dies of influenza, a five-year-old boy is dropped off at the doorstep of Mr. Piggles, the proprietor of the York Soap Factory. Cared for by Penelope, Mr. Piggles' daughter, this green-eyed boy with red, curly hair is called Apples. Ten years old in 1812, Apples seeks to find his father; the only clue is a battered brass button.

His search leads him to a chance encounter with Major-General Isaac Brock, Canada's legendary figure assigned to protect the Canadas. Apples reveres Brock and sees him as a fearless and assertive leader.

Meanwhile in Washington, nineteen hotheaded senators determined to invade the Canadas believe the conquest will be a cakewalk, and the American army attacks. Brock acts decisively, and assassins are sent to eliminate him. Immersed in loyalty and defiance, Apples unravels the American's plot to kill Brock. His bravery saves the major-general's life.

An engaging historical narrative of adventure and bravery, Apples and the Fallen Idols provides a view of the times, events, and heroes of the War of 1812 as seen through the eyes of a boy soldier.

D. Richard Truman was born in the steel town of Hamilton, Ontario, Canada. He worked for forty-five years as a Creative Director for large multinational agencies. He lives with his wife, Beverley, in Kitchener, Ontario, Canada. They have two daughters and five grandchildren. This is Truman's seventh novel.