Unsettled Solidarities: Asian and Indigenous Cross-Representations in the Américas (Hardcover) 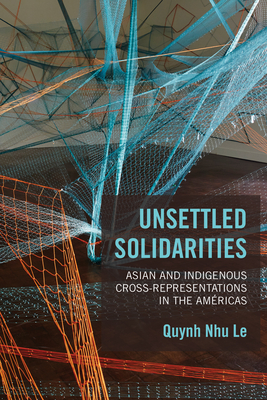 Unsettled Solidarities examines contemporary Asian and Indigenous cross-representations within different settler states in the Américas. Quynh Nhu Le looks at literary works by both groups alongside public apologies, interviews, and hemispheric race theories to trace cross-community tensions and possibilities for solidarities amidst the uneven imposition of racialization and settler colonization.

Contrasting texts such as Maxine Hong Kingston’s China Men with Gerald Vizenor’s Hiroshima Bugi, and Karen Tei Yamashita’s Through the Arc of the Rain Forest with Leslie Marmon Silko’s Almanac of the Dead, among others, Le reveals how settler colonialism persists through the liberal ideological structuring or incorporation of critical and political resistance. She illuminates the tense collisions of Asian and Indigenous movements from the heroic/warrior traditions, reparations and redress, and transnational/cross-racial mobilization against global capital to mixed-race narratives.

Reading these tensions as formed through the unstable grammatical and emotional economies of liberalism, Le frames settler colonialism as a process that is invoked and yet ruptured by Asian and Indigenous peoples. In analyzing Asian/Indigenous crossings in the United States, Canada, Mexico, and Brazil, Unsettled Solidarities conveys the logics and instabilities that connect these settler empires.

Quynh Nhu Le is an Assistant Professor of English at the University of South Florida.