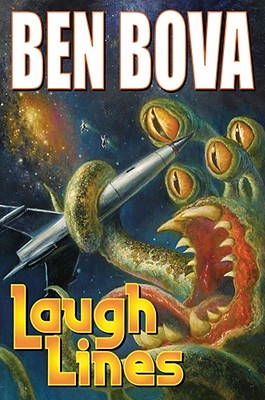 The Future is Coming, and It’s Going to be Hilarious! First Time in Paperback for This Wildly Comic Look by a Best-Selling and Award-Winning Writer at Several Possible—and Bizarre—Tomorrows, Including Two Complete Novels

Ben Bova, best-selling and award-winning author of the “Grand Tour” and “Asteroid Wars” series, takes a sardonic look at the humorous possibilities of future technology.

The Starcrossed: Bill Oxnard, a young technological genius, had perfected true three-dimensional television, making ordinary TV obsolete. He thought he would be rich and famous—but he hadn’t realized how deranged the executives running the industry were; nor what sort of programs they were planning to broadcast using the new process in the maniacal quest for ratings.

Cyberbooks: Carl Lewis has a dream—to make books accessible and affordable to every person in the country, and thinks his “cyberbook,” about as large and as cheap as a pocket calculator, will make it possible for anyone to download books directly and cheaply. But he has no idea what he’s about to get into, nor does his contact at Bunker Books, lovely but naïve aspiring editor Lori Tashkajian. Will they survive this foray into the cut-throat world of big publishing? And just who is suddenly murdering all those nice elderly people on the streets of New York, anyway?

These two full-length novels of twistedly comic, but very possible futures, plus six shorter but equally witty works, add up to a generous volume of futuristic fun and hilarious high-tech.

Ben Bova is a six-time winner of the coveted Hugo Award, and many other awards, including the John W. Campbell Memorial Award for Best Novel of the Year (2006, for Titan) and the Lifetime Achievement Award of the Arthur C. Clarke Foundation. He is the former editor of Analog and Omni magazines, and the author of over a hundred books, both fiction and non-fiction. Bova has served as president of both the Science Fiction Writers of America and the National Space Society. He lives in Florida.