The Fatah-Hamas Rift: An Analysis of Failed Negotiations (Hardcover) 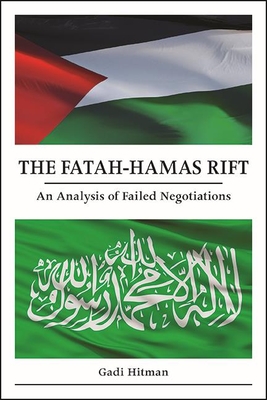 How did two national movements--which both share the same national ethos based on territorial and human elements and the same history--fail to reach an agreement that would unite their forces to realize their aspirations? Both sides recall the Nakba (catastrophe), the term for the defeat in the 1948 war and the subsequent Palestinian exodus. They also both emphasize issues such as the victimization of refugees, widows, and orphans; the sanctity of Jerusalem and Palestine; the contributions of shuhadaa (martyrs) to the national struggle still in progress; and the suffering of the prisoners in Israeli jails. Despite this joint confrontation with the same opponent--Israel--Fatah leaders (the organization whose people are the foundation of the Palestinian Authority) and Hamas have failed to find a path to reconciliation. Examining the Palestinian internal question from an original angle, The Fatah-Hamas Rift analyzes the many rounds of negotiations and seeks to explain this failure, with a focus on the decade after 2007.

Gadi Hitman is Assistant Professor of Middle Eastern Studies at Ariel University in Israel. He is coauthor (with Alexander Bligh) of National Schism and Civil Integration: Mutual Relations between the Israeli Central Government and the Israeli Arab Palestinian Minority and the author of Israel and Its Arab Minority, 1948-2008: Dialogue, Protests, Violence.