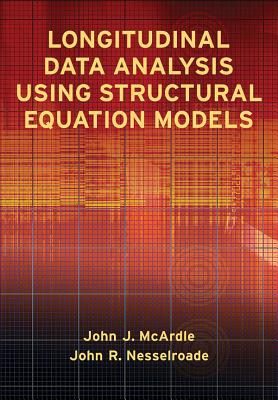 By John J. McArdle, John R. Nesselroade
$89.95
Unavailable, Out of Stock, or Out of Print

When determining the most appropriate method for analyzing longitudinal data, you must first consider what research question you want to answer.

In this book, McArdle and Nesselroade identify five basic purposes of longitudinal structural equation modeling. For each purpose, they present the most useful strategies and models. Two important but underused approaches are emphasized: multiple factorial invariance over time and latent change scores.

The book covers a wealth of models in a straightforward, understandable manner. Rather than overwhelm the reader with an extensive amount of algebra, the authors use path diagrams and emphasize methods that are appropriate for many uses.

John J. (Jack) McArdle, PhD, is senior professor of psychology at the University of Southern California (USC), where he heads the Quantitative Methods Area and has been chair of the USC Research Committee. He received a BA from Franklin & Marshall College (1973; Lancaster, PA) and both MA and PhD degrees from Hofstra University (1975, 1977; Hempstead, NY). He now teaches classes in psychometrics, multivariate analysis, longitudinal data analysis, exploratory data mining, and structural equation modeling at USC. His research was initially focused on traditional repeated measures analyses and moved toward age-sensitive methods for psychological and educational measurement and longitudinal data analysis, including publications in factor analysis, growth curve analysis, and dynamic modeling of abilities. Dr. McArdle is a fellow of the American Association for the Advancement of Science (AAAS). He served as president of the Society of Multivariate Experimental Psychology (SMEP, 1992-1993) and the Federation of Behavioral, Cognitive, and Social Sciences (1996-1999). A few other honors include the 1987 R. B. Cattell Award for Distinguished Multivariate Research from SMEP. Dr. McArdle was recently awarded an National Institutes of Health-MERIT grant from the National Institute on Aging for his work, "Longitudinal and Adaptive Testing of Adult Cognition" (2005-2015), where he is working on new adaptive tests procedures to measure higher order cognition as a part of large-scale surveys (e.g. the Human Resources Services). Working with APA, he has created and led the Advanced Training Institute on Longitudinal Structural Equation Modeling (2000-2012), and he also teaches a newer one, Exploratory Data Mining (2009-2014). John R. Nesselroade, PhD, earned his BS degree in mathematics (Marietta College, Marietta, OH, 1961) and MA and PhD degrees in psychology (University of Illinois at Urbana-Champaign, 1965, 1967). Prior to moving to the University of Virginia in 1991, Dr. Nesselroade spent 5 years at West Virginia University and 19 years at The Pennsylvania State University. He has been a frequent visiting scientist at the Max Planck Institute for Human Development, Berlin. He is a past-president of APA's Division 20 (Adult Development and Aging [1982-1983]) and of SMEP (1999-2000). Dr. Nesselroade is a fellow of the AAAS, the APA, the Association for Psychological Science, and the Gerontological Society of America. Other honors include the R. B. Cattell Award for Distinguished Multivariate Research and the S. B. Sells Award for Distinguished Lifetime Achievement from SMEP. Dr. Nesselroade has also won the Gerontological Society of America's Robert F. Kleemeier Award. In 2010, he received an Honorary Doctorate from Berlin's Humboldt University. He is currently working on the further integration of individual level analyses into mainstream behavioral research. The two authors have worked together in enjoyable collaborations for more than 25 years.