Among the Mad (Compact Disc) 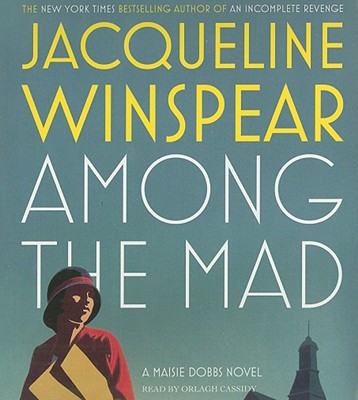 By Jacqueline Winspear, Orlagh Cassidy (Read by)
This Book Is Not Sold Online - Inquire In Store
Not In Stock/Special Order

“Conscripted as a special advisor to Scotland Yard, psychologist and investigator Maisie Dobbs once again takes us to an unsettled postwar London. After her proximity to a veteran's suicide, Maisie searches for a madman, whose deadlines threaten havoc for the government and people of London. Jacqueline Winspear consistently delivers strong characters and an intelligent, thought-provoking story.”
— Becky Milner, Vintage Books, Vancouver, WA

In the thrilling new novel by the "New York Times" bestselling author of "An Incomplete Revenge," Maisie Dobbs must catch a madman before he commits murder on an unimaginable scale

It's Christmas Eve 1931. On the way to see a client, Maisie Dobbs witnesses a man commit suicide on a busy London street. The following day, the prime minister's office receives a letter threatening a massive loss of life if certain demands are not met--and the writer mentions Maisie by name. After being questioned and cleared by Detective Chief Superintendent Robert MacFarlane of Scotland Yard's elite Special Branch, she is drawn into MacFarlane's personal fiefdom as a special adviser on the case. Meanwhile, Billy Beale, Maisie's trusted assistant, is once again facing tragedy as his wife, who has never recovered from the death of their young daughter, slips further into melancholia's abyss. Soon Maisie becomes involved in a race against time to find a man who proves he has the knowledge and will to inflict death and destruction on thousands of innocent people. And before this harrowing case is over, Maisie must navigate a darkness not encountered since she was a nurse in wards filled with shell-shocked men.

In "Among the Mad," Jacqueline Winspear combines a heart-stopping story with a rich evocation of a fascinating period to create her most compelling and satisfying novel yet.

Jacqueline Winspear is the author of "An Incomplete Revenge"-a "New York Times" bestseller-and four other Maisie Dobbs novels. She has won numerous awards for her work, including the Agatha, Alex, and Macavity awards for the first book in the series, Maisie Dobbs. Originally from the United Kingdom, she now lives in California.Orlagh Cassidy is the winner of the 2009 Best Voice in Children & Family Listening and the 2008 and 2011 Best Voice in Mystery & Suspense. She's narrated for Jacqueline Winspear, James Patterson, Erica Spindler, Beth Harbison, and Frank Herbert, among others.

"Not only does [narrator Orlagh Cassidy] navigate nimbly through conversations featuring various British accents, but she also is skilled at capturing personalities through speech.... Between suspenseful episodes, Cassidy invests scenes like cooking a simple dinner with an almost- sensuous domesticity."--AudioFile, Earphones Award winner