Taking Cover: One Girl's Story of Growing Up During the Iranian Revolution (Library Binding) 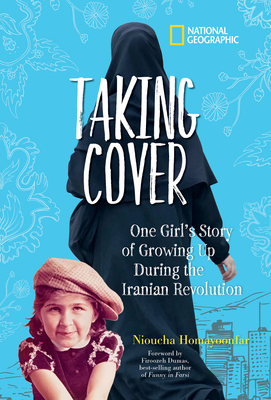 By Nioucha Homayoonfar
$28.90
Unavailable, Out of Stock, or Out of Print

This coming-of-age memoir, set during the Iranian Revolution, tells the true story of a young girl who moves to Tehran from the U.S. and has to adjust to living in a new country, learning a new language, and starting a new school during one of the most turbulent periods in Iran's history.

When five-year-old Nioucha Homayoonfar moves from the U.S. to Iran in 1976, its open society means a life with dancing, women's rights, and other freedoms. But soon the revolution erupts and the rules of life in Iran change. Religion classes become mandatory. Nioucha has to cover her head and wear robes. Opinions at school are not welcome. Her cousin is captured and tortured after he is caught trying to leave the country. And yet, in the midst of so much change and challenge, Nioucha is still just a girl who wants to play with her friends, please her parents, listen to pop music, and, eventually, have a boyfriend. Will she ever get used to this new culture? Can she break the rules without consequences? Nioucha's story sheds light on the timely conversation about religious, political, and social freedom, publishing in time for the 40th anniversary of the Iranian Revolution.

An international citizen from a young age, NIOUCHA HOMAYOONFAR was born in Brussels to an Iranian father and French mother, spent her earliest years in Pittsburgh, and became a teenager in Tehran. Homayoonfar grew up caught between two worlds: a free and Western life lived indoors, and a repressive life lived outside the confines of the family home. The family finally left Iran when Nioucha was nearly 17 years old. In the U.S., she studied art history and Spanish at the University of Pittsburgh. She now lives in the Washington, D.C., area with her husband, author and journalist Stew Magnuson, and their two children.

Foreword writer FIROOZEH DUMAS is an Iranian writer and the author of the New York Times best-selling book Funny in Farsi. She was a finalist for the PEN/USA award in 2004 and a finalist in 2005 for an Audie Award for best audio book. Dumas was also the first Middle Eastern woman to become a finalist for the prestigious Thurber Prize for American Humor. In 2008 she published Laughing Without an Accent, also a New York Times best seller. And in 2016, she published her first book of middle grade fiction, It Ain't So Awful, Falafel. She speaks at hundreds of schools, conferences, and festivals.

"Equal parts engrossing and infuriating, this serves as a reminder of how easily freedoms taken for granted can slip away." -- Booklist