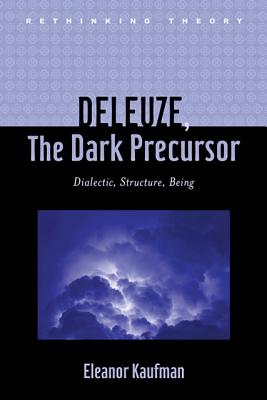 A thoughtful and original analysis of the writings of influential French philosopher Gilles Deleuze.

Gilles Deleuze is considered one of the most important French philosophers of the twentieth century. Eleanor Kaufman situates Deleuze in relation to others of his generation, such as Jean-Paul Sartre, Pierre Klossowski, Maurice Blanchot, and Claude L vi-Strauss, and she engages the provocative readings of Deleuze by Alain Badiou and Slavoj Zizek.

Deleuze, The Dark Precursor is organized around three themes that critically overlap: dialectic, structure, and being. Kaufman argues that Deleuze's work is deeply concerned with these concepts, even when he advocates for the seemingly opposite notions of univocity, nonsense, and becoming. By drawing on scholastic thought and reading somewhat against the grain, Kaufman suggests that these often-maligned themes allow for a nuanced, even positive reflection on apparently negative states of being, such as extreme inertia. This attention to the negative or minor category has implications that extend beyond philosophy and into feminist theory, film, American studies, anthropology, and architecture.

Eleanor Kaufman is a professor of comparative literature, English, and French and Francophone studies, as well as an affiliate in Jewish studies and the Center for the Study of Religion at the University of California, Los Angeles. She is author of The Delirium of Praise: Bataille, Blanchot, Deleuze, Foucault, Klossowski and coeditor of Deleuze and Guattari: New Mappings in Politics, Philosophy, and Culture.