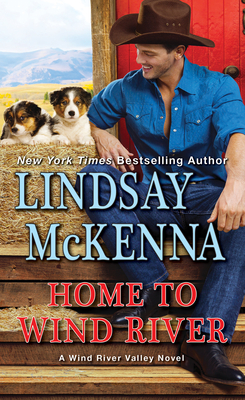 This is book number 7 in the Wind River series.

The new novel from the bestselling author of Lone Rider.

After a harrowing tour of duty in Afghanistan, Army nurse Lily Thompson escapes to Wind River Ranch to find herself once more. Working as a caregiver to foreman Jake Murdoch’s elderly mother, Lily almost feels at peace—except for the unsettling presence of Jake, a tight-lipped, intimidating man everyone calls Bear. But one look in the powerful ex-Marine’s eyes and Lily glimpses a vulnerability that shakes her soul: a hurt she understands all too well—and longs to heal . . .

Jake is ready to rail at the fates when Lily moves into his home. Everything about this captivating woman calls to him, demanding that he abandon his solitary stance and start to live again. But Jake is a man who knows that no one can save him from the past that stalks his heart and mind. Not even sweet, achingly beautiful Lily. Still, that doesn’t stop his longing to pull her into his arms—and keep her there forever. Will time, and patience, bring them the courage to make their connection real? . . .

New York Times and USA Today bestselling author Lindsay McKenna is the pseudonym of award-winning author Eileen Nauman. With more than 185 titles to her credit and approximately 23 million books sold in 33 countries worldwide, Lindsay is one of the most distinguished authors in the women's fiction genre. She is the recipient of many awards, including six RT Book Reviews awards (including best military romance author) and an RT Book Reviews Career Achievement Award. In 1999, foreseeing the emergence of ebooks, she became the first bestselling women's fiction author to exclusively release a new title digitally. In recognition of her status as one of the originators of the military adventure/romance genre, Lindsay is affectionately known as “The Top Gun of Women's Military Fiction.” Lindsay comes by her military knowledge and interest honestly—by continuing a family tradition of serving in the U.S. Navy. Her father, who served on a destroyer in the Pacific theater during World War II, instilled a strong sense of patriotism and duty in his daughter. Visit Lindsay at www.lindsaymckenna.com.