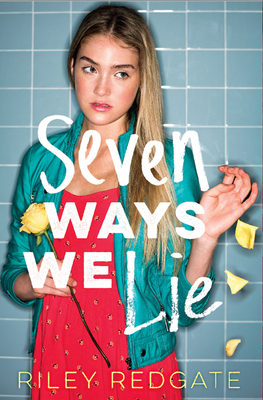 By Riley Redgate
$17.95
Unavailable, Out of Stock, or Out of Print

In Seven Ways We Lie, a chance encounter tangles the lives of seven high school students, each resisting the allure of one of the seven deadly sins, and each telling their story from their seven distinct points of view.

The juniors at Paloma High School all have their secrets, whether it’s the thespian who hides her trust issues onstage, the closeted pansexual who only cares about his drug-dealing profits, or the neurotic genius who’s planted the seed of a school scandal. But it’s Juniper Kipling who has the furthest to fall. No one would argue that Juniper—obedient daughter, salutatorian, natural beauty, and loyal friend—is anything but perfect. Everyone knows she’s a saint, not a sinner; but when love is involved, who is Juniper to resist temptation? When she begins to crave more and more of the one person she can’t have, her charmed life starts to unravel.

Then rumors of a student–teacher affair hit the fan. After Juniper accidentally exposes her secret at a party, her fate falls into the hands of the other six sinners, bringing them into one another’s orbits. All seven are guilty of something. Together, they could save one another from their temptations—or be ruined by them.

Riley Redgate’s twisty YA debut effortlessly weaves humor, heartbreak, and redemption into a drama that fans of Jenny Han and Stephanie Perkins will adore.

Riley Redgate is a graduate of Kenyon College in Gambier, Ohio. Her first two novels, Noteworthy and Seven Ways We Lie, earned critical acclaim. She lives and writes in Chicago.

". . . the characters are each distinct—Lucas' pansexuality and Valentine's asexuality are welcome explorations rarely seen in teen lit . . ."

"Most of the characters’ personal struggles are individually compelling, and most readers will find at least one person with whom they can identify... Redgate is right on trend with the type of story that’s popular with teens at the moment, and her book is sure to find a fan base."
— School Library Journal

"Debut author Redgate neatly captures the heart, soul, and social intricacies of a high school in a conservative Kansas City suburb...Redgate writes with much insight into the complicated world of contemporary high school, revealing both its hard edges (the taunts of jocks toward an eccentric outcast, vicious rumor mills) and its tender underbelly (the loyalty of friends, the pain of a broken first love, the excitement of new romance). By book's end, readers will feel like they have seven new friends."
— Publisher's Weekly

Engaging and raw and real...a realistic contemporary YA delight.
— Book Riot, "The Best Books of 2016...So Far"