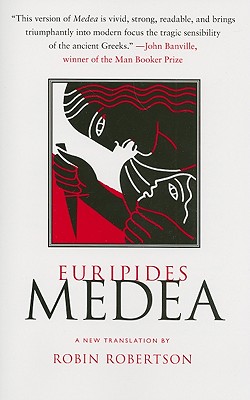 By Euripides, Robin Robertson (Translated by)
$13.99

The old songs will have to change.
No more hymns to our faithlessness and deceit.
Apollo, god of song, lord of the lyre,
never passed on the flame of poetry to us.
But if we had that voice, what songs
we'd sing of men's failings, and their blame. History is made by women, just as much as men.

Medea has been betrayed. Her husband, Jason, has left her for a younger woman. He has forgotten all the promises he made and is even prepared to abandon their two sons. But Medea is not a woman to accept such disrespect passively. Strong-willed and fiercely intelligent, she turns her formidable energies to working out the greatest, and most horrifying, revenge possible.

Euripides' devastating tragedy is shockingly modern in the sharp psychological exploration of the characters and the gripping interactions between them. Award-winning poet Robin Robertson has captured both the vitality of Euripides' drama and the beauty of his phrasing, reinvigorating this masterpiece for the twenty-first century.

Euripides is thought to have lived between 485 and 406 BC. He is considered to be one of the three great dramatists of Ancient Greece, alongside Aeschylus and Sophocles. He is particularly admired by modern audiences and readers for his astute and balanced depiction of human behavior. Medea is his most famous work.

Robin Robertson is a vegan chef and award-winning cookbook author whose culinary experience spans nearly thirty years. She has been a chef, caterer, cooking teacher, and food columnist. Her bestselling cookbooks include Quick-Fix Vegan, Quick-Fix Vegetarian, Vegan Planet, Fresh from the Vegan Slow Cooker, Vegan on the Cheap, 1000 Vegan Recipes, and Vegan Fire & Spice. Robin’s features and columns regularly appear in VegNews Magazine and online. Robin lives in the Shenandoah Valley of Virginia with her husband, four cats, and more ducks than she can count. Follow Robin on Facebook and Twitter (@globalvegan) as well as on her website: www.robinrobertson.com.

"The purpose of translation is to set a play free. This is just what Robin Robertson does. In his lucid, free-running verse, Medea's power is released into the world, fresh and appalling, in words that seem spoken for the first time." -- Anne Enright, winner of the 2007 Man Booker Prize

"This version of Medea is vivid, strong, readable, and brings triumphantly into modern focus the tragic sensibility of the ancient Greeks." -- John Banville, winner of the 2005 Man Booker Prize

"Robertson is master of the dark and wounded, the torn complexities of human relations, and Medea offers a perfect match for his sensibilities. This is an urgent, contemporary,and eloquent translation." -- A.L.Kennedy, winner of the 2007 Costa Book of the Year

"Robin Robertson has given us a Medea fit for our times; his elegant and lucid free translation of Euripides' masterpiece manages the trick of sounding wholly contemporary but never merely 'modern' -- and will be an especially lucky discovery for those encountering the play for the first time." -- Don Paterson, winner of the T. S. Eliot Prize and the Whitbread Poetry Award

"[O]ne of the main virtues of this fine translation is Robertson's ear for the verbal brutality committed by the estranged Medea and Jason on one another during their confrontations....closer examination reveals how much thought has gone into its making...These subtleties support Robertson's claim, in the introduction, that his main concern was 'to provide an English version that is as true to the Greek as it is to the way that English is spoken now'.... [Robin Robertson's translation] certainly deserves to be staged. It would provide a more attractive basis for a performance text of the original play than anything else currently on offer." -- Edith Hall, Times Literary Supplement