Eyes on the Horizon: Serving on the Front Lines of National Security (Paperback) 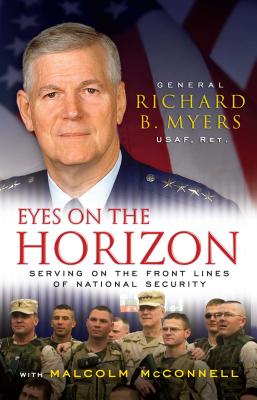 Chairman of the Joints Chiefs of Staff during the critical four years following September 11, General Richard B. Myers proposes a bold new plan to prepare America for the diverse national security challenges of the twenty-first century.

In this captivating and revealing memoir, General Myers talks candidly about his career in the military, the unforgettable events of September 11, and the global war on terror. Myers believes that America has misidentified its adversary, focusing too narrowly on tactical battles instead of on a long-range strategy that will overcome a global insurgency. Rather than mandate what Islam should become, we must work with an international community that includes responsible non-Western states to protect against the behaviors we consider universally unacceptable—especially those that promote violence against the U.S. and its allies. Finally, Myers maintains we must integrate our own government agencies so that we can focus a sustained approach to this strategy.

Told with unfailing honesty, Eyes on the Horizon is an unforgettable memoir of one of our nation’s highest-ranking officers and a courageous call for change that will strengthen American national security and defend a democratic way of life.

General Richard B. Myers retird as the 15th Chairman of the Joint Chiefs of Staff in October, 2005, after serving over 40 years in the US Air Force. A native of Kansas City, Kansas, and a 1965 graduate of Kansas State University, General Myers has held command positions at every level, including Commander of US Space Command, North American Aerospace Defense Command, Pacific Air Forces, US Forces Japan, and two fighter wings. A fighter pilot with over 4,100 hous, General Myers logged more than 600 combat hours during the Vietnam conflict.

General Myers now sits on several public and non-profit boards and currently lectures nationally on national security issues and leadership. He is Foundation Professor of Military Histor and Leadership at Kansas State University and holds the Colin Powell Chair of Leadership, Ethics, and Character at National Defense University. He lives in the Washington, D.C. area with his wife, Mary Jo. They have two daughters and a son, and, to his great joy, a growing number of grandchildren.

Malcolm McConnell is the coauthor of the #1 New York Times bestseller American Soldier with Tommy Franks and My Year in Iraq with L. Paul Bremer III.