Brothers: George Howe Colt on His Brothers and Brothers in History (Hardcover) 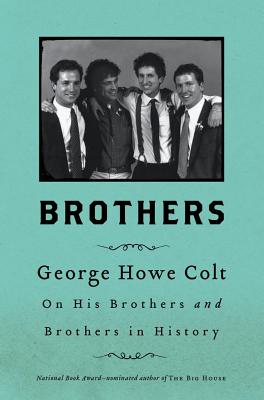 From the bestselling National Book Award finalist, a masterful blend of history and memoir featuring the author's four brothers and iconic brothers in history--the Thoreaus, the Van Goghs, the Kelloggs, the Marx brothers, and the Booths. George Howe Colt's The Big House is, as the New Yorker said, "full of surprises and contains more than seems possible: a family memoir, a brief history of the Cape, an investigation of nostalgia, a study of class, and a meditation on the privileges and burdens of the past." Colt's new book, Brothers, is an equally idiosyncratic and masterful blend of memoir and history featuring both the author's three brothers and iconic brothers in history--the Booths, the Van Goghs, the Kelloggs, the Marx Brothers, and the Thoreaus. Colt believes he would be a different man had he not grown up in a family of four brothers. He movingly recounts the adoration, envy, affection, resentment, and compassion in their shifting relationships from childhood through middle age, also rendering a volatile decade in American life: the 1960s. Some of the Colt men now have children; all have found their own paths; all now consider their brothers to be their closest friends. In alternate chapters, Colt parallels his quest to understand how his own brothers shaped his life with an examination of the rich and complex relationships between iconic brothers in history. He explores how Edwin Booth grew up to become the greatest actor on the nineteenth-century American stage while his younger brother John grew up to assassinate a president. How Will Kellogg worked for his overbearing older brother John Harvey as a subservient yes-man for two decades until he finally broke free and launched the cereal empire that outlasted all his brother's enterprises. How Vincent van Gogh would never have survived without the financial and emotional support of his younger brother, Theo, in a claustrophobic relationship that both defined and confined them. How Henry David Thoreau's life was shadowed by the early death of his older brother, John, who haunted and inspired his writing. And how the Marx Brothers collaborated on the screen but competed offstage for women, money, and fame. Illuminating and affecting, this book will be revelatory for any parent of sons, any sibling, anyone curious about how a man's life can be molded by his brothers. Colt's magnificent book is a testament to the abiding power of fraternal love.

“A masterful blend of history and memoir…”


“Anyone who’s had the pleasure of reading Colt’s previous, National Book Award-nominated work, The Big House, will know his delicate, detailed, ironically self-mocking way with prose, and his lucid, affectionate fair-mindedness. . .Colt has done a prodigious job of research and synthesis, and his skill at storytelling is such that each of them is transformed into something fresh, dramatic, and emotionally piercing.”


“Colt writes movingly and insightfully about how the mercurial fraternal relationships can so quickly move from loving idolatry to hands-around-the-throat…This is one fine book, both wildly entertaining and utterly thought-provoking.”


“Detailed considerations…of well-known brothers and cameo references to many others, famous and not so, help Colt in his quest to explain the mystery of how siblings can be so different from one another.”


“Colt elegantly captures the complicated dynamics between brothers that both bind and define them, as well as the evolving relationships between his own brothers as they move into middle age.”

“Colt is an acute observer and sensitive chronicler of male emotion…Searingly poignant.”