The Mentality of Apes (Paperback) 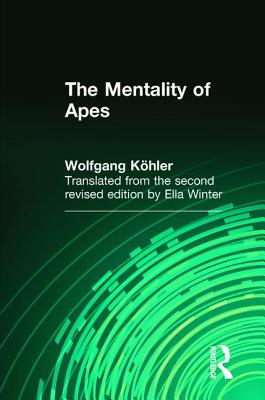 By Wolfgang Köhler, Ella Winter (Editor)
$46.95
Unavailable, Out of Stock, or Out of Print

Wolfgang K hler demonstrated that chimpanzees could solve problems by applying insight. His research showed that the intellectual gap between humans and chimpanzees was much narrower than previously thought. The work was revolutionary when originally published in 1917 in German, but it was largely ignored for decades because it violated the conventional wisdom that animal behavior is simply the result of instinct or conditioning.

However, K hler's research showed this was not the case. He used four chimps in his experiments, Chica, Grande, Konsul, and Sultan. The experiments consisted of placing chimpanzees in an enclosed area and presenting them with a desired object that was out of reach. In one experiment, K hler placed bananas outside Sultan's cage and two bamboo sticks inside his cage which needed to be put together to reach the bananas. K hler demonstrated the solution to Sultan by putting his fingers into the end of one of the sticks. After some contemplation, Sultan put the two sticks together and was able to reach the bananas.

As Jaan Valsiner shows in his introduction to this classic work, K hler's analysis of the intelligence of apes marked a turning point in the psychology of thinking and the continuing struggle between behaviorism and cognitive psychology. K hler achieved his two-fold aim: to determine the relationship between the intellectual capacity of higher primates and man, and to gain insight into the nature of intelligent acts.

Wolfgang Kohler (1887-1967) was a German psychologist and a major contributor to the creation of Gestalt psychology. Jaan Valsiner is Niels Bohr Professor of Cultural Psychology at Aalborg University, Denmark.