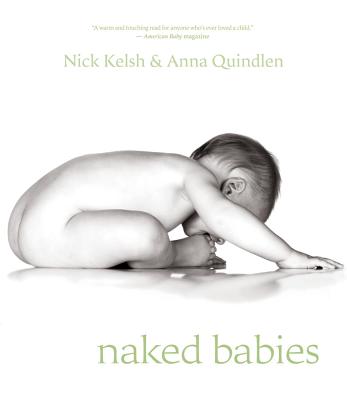 By Nick Kelsh, Anna Quindlen
$19.95
Unavailable, Out of Stock, or Out of Print

In Naked Babies, Nick Kelsh and Anna Quindlen collaborate to produce a unique view of babies—one that owes nothing to tradition, sentimentality, or the cult of the cute. Unlike traditional baby photographs, Nick Kelsh’s amazing black-and-white pictures focus on specific aspects of babies—the perfection of a hand, the swirls of a cowlick, the smoothness of skin on the neck—and all are honest, exquisite, and invitingly tactile.

Anna Quindlen’s essays are as graceful, snappy, perceptive, and personal as anything she has ever written. They muse on what it is about babies that causes our hearts to crinkle and fold: “The meaning of life is in them.”

You’ll share some of the things that Quindlen has learned as a mother, such as: “From time to time, I would lie on the floor with my babies to see exactly what they were seeing when it looked as though they were just wasting time” and . . . “The next time you’re sitting in a meeting after three cups of coffee, badly needing to go to the bathroom but instead doodling dutifully, crossing your legs and watching the clock, remember that if you were a baby, you would have gone by now, and no one would be the wiser.”

Kelsh’s photographs and Quindlen’s text complement each other perfectly. Two masters of their craft have created an unusual meditation and wondrous book—a totally original gift for every parent or parent-to-be.

Nick Kelsh is the second of five children born to Joyce and Carroll Kelsh of Fargo, North Dakota. He learned about f-stops and shutter speeds on the Leica his father brought home from World War II. He is the author and/or photographer of nine books, including How to Photograph Your Baby and a partner in the communications firm Kelsh Wilson Design. Kelsh showed no apparent special talent as a baby.

Anna Quindlen was born in Philadelphia in 1952, the first of five children of Prudence and Robert V. Quindlen. She was an exceptionally large baby with a full head of hair. In the years since, she has had three large babies of her own, worked for The New York Times, won the Pulitzer Prize, and written five books, including the best-selling novels Object Lessons and One True Thing.