A Fist in the Hornet's Nest: On the Ground in Baghdad Before, During & After the War (Paperback) 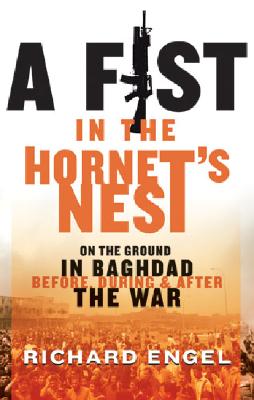 Now in paperback, an insightful book that answers the questions that America wants answered. Based on his private journals and his public interviews, A Fist in the Hornet's Nest is Richard Engel's harrowing, fascinating, and informative view of Iraq from street level. Through his wartime reportage, Engel has emerged as one of the preeminent journalists of his generation and an invaluable source on Middle Eastern affairs. For those in search of an in-depth analysis or those trying to make sense of the recent war, Engel's book is as elucidating as it is riveting. His critical assessments for the future of the Gulf region and his analysis of where the American campaign succeeded and where, in some instances, it has failed constitute a book that is sure to be an invaluable contribution to the Middle Eastern debate for years to come.

Richard Engel graduated from Stanford University in 1996 and moved to Cairo, where he reported on Middle Eastern affairs for the BBC and Voice of America. He is a correspondent for NBC News and works out of the Baghdad bureau. He also reports on events throughout the Middle East, Asia, Africa, and Europe.