The Hemingses of Monticello: An American Family (MP3 CD) 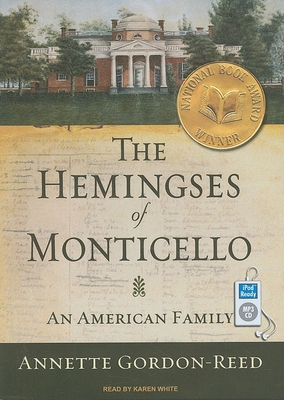 By Annette Gordon-Reed, Karen White (Narrated by)
This Book Is Not Sold Online - Inquire In Store
Hard to Find

This epic work tells the story of the Hemingses, whose close blood ties to our third president had been systematically expunged from American history until very recently. Now, historian and legal scholar Annette Gordon-Reed traces the Hemings family from its origins in Virginia in the 1700s to the family's dispersal after Jefferson's death in 1826. It brings to life not only Sally Hemings and Thomas Jefferson but also their children and Hemings's siblings, who shared a father with Jefferson's wife, Martha. The Hemingses of Monticello sets the family's compelling saga against the backdrop of Revolutionary America, Paris on the eve of its own revolution, 1790s Philadelphia, and plantation life at Monticello. Much anticipated, this book promises to be the most important history of an American slave family ever written.

Annette Gordon-Reed is a professor of history at Rutgers University and the author of "Thomas Jefferson and Sally Hemings: An American Controversy."

Karen White has been narrating and directing audiobooks for more than a dozen years and has well over one hundred books to her credit. Honored to be included among "AudioFile"'s Best Voices 2010 and 2011, she is also an Audie Award finalist and has earned multiple "AudioFile" Earphones Awards for narration and direction.

"[Listeners] will find it absorbing." ---The New York Times