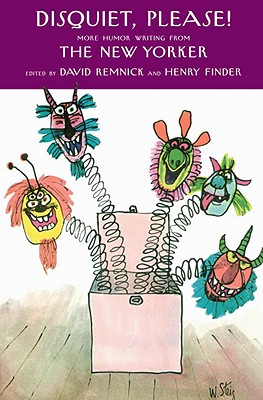 By David Remnick (Editor), Henry Finder (Editor)
This Book Is Not Sold Online - Inquire In Store
Not In Stock/Special Order

The New Yorker is, of course, a bastion of superb essays, influential investigative journalism, and insightful arts criticism. But for eighty years, it’s also been a hoot. In fact, when Harold Ross founded the legendary magazine in 1925, he called it “a comic weekly,” and while it has grown into much more, it has also remained true to its original mission. Now an uproarious sampling of its funny writings can be found in a hilarious new collection, one as satirical and witty, misanthropic and menacing, as the first, Fierce Pajamas. From the 1920s onward–but with a special focus on the latest generation–here are the humorists who set the pace and stirred the pot, pulled the leg and pinched the behind of America.

S. J. Perelman unearths the furious letters of a foreign correspondent in India to the laundry he insists on using in Paris (“Who charges six francs to wash a cummerbund?!”). Woody Allen recalls the “Whore of Mensa,” who excites her customers by reading Proust (or, if you want, two girls will explain Noam Chomsky). Steve Martin’s pill bottle warns us of side effects ranging from hair that smells of burning tires to teeth receiving radio broadcasts. Andy Borowitz provides his version of theater-lobby notices (“In Act III, there is full frontal nudity, but not involving the actor you would like to see naked”). David Owen’s rules for dating his ex-wife start out magnanimous and swiftly disintegrate into sarcasm, self-loathing, and rage, and Noah Baumbach unfolds a history of his last relationship in the form of Zagat reviews.

Meanwhile, off in a remote “willage” in Normandy, David Sedaris is drowning a mouse (“This was for the best, whether the mouse realized it or not”).

If laughter is the best medicine, Disquiet, Please is truly a wonder drug.

David Remnick is the editor of The New Yorker.

Henry Finder is the editorial director of The New Yorker.

“A complete delight from beginning to end.”
–The New York Times, on Fierce Pajamas