The Best Cook in the World: Tales from My Momma's Southern Table (Paperback) 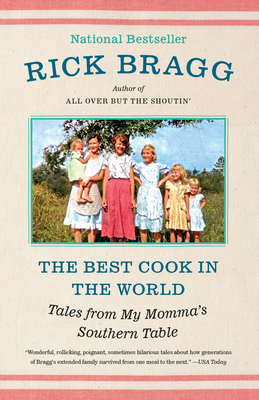 “This is the funniest cookbook in the world! Packed with old fashioned southern recipes, Bragg's brilliant storytelling and old black-and-white photographs bring his relatives to life. From lost cows to dead hogs to giant turtles, his stories feature grandparents and great grandparents, aunts and uncles. But most of all, his mother's voice comes through loud and clear. More than anything, you are taken by the back-and-forth between Bragg and his down-to-earth, matter-of-fact, shy but feisty mother. I absolutely loved this book! And I recommend the pecan pie!”
— Helen Stewart, Quail Ridge Books, Raleigh, NC

Here are irresistible stories and recipes from across generations. They come, skillet by skillet, from Bragg’s ancestors, from feasts and near famine, from funerals and celebrations, and from a thousand tales of family lore as rich and as sumptuous as the dishes they inspired. Deeply personal and unfailingly mouthwatering, The Best Cook in the World is a book to be savored.

Rick Bragg is the author of eight books, including the best-selling Ava’s Man and All Over but the Shoutin’. He is also a regular contributor to Garden & Gun magazine. He lives in Alabama.

“Wonderful, rollicking, poignant, sometimes hilarious tales about how generations of Bragg’s extended family survived from one meal to the next.” —USA Today

“A glorious collection of tales. . . . Bragg writes stories about family . . . and he does it better than almost anybody else. His just happens to be a family of excellent cooks who do much of their relating through the food they grow, hunt, prepare and occasionally steal.” —The New York Times Book Review

“A tribute, a monument, to [Bragg’s] mother and her people, captured here in solid recipes for good food, charming details and funny conversations.” —The Wall Street Journal

“Put together, all those stories read like a lush and lyrical novel, sometimes hilarious, sometimes harrowing. . . . Bragg’s deep love for his mother, and her cooking, shines throughout.” —Tampa Bay Times

“Rick Bragg serves up a feast. . . . A love song to the woman who raised him and who has been his greatest muse.” —The New Orleans Advocate

“The stories, as much as the portrait they paint of [Bragg’s] family and their times, are baroque and profane, simultaneously moral and amoral, loving and blunt.” —San Francisco Chronicle

“One of my favorite writers of all time. . . . Both an incredibly evocative portrait of [Bragg’s] mother and a collection of his mother’s recipes.” —Ed Levine, Serious Eats

“Bragg has a bone-deep empathy for people who endure hard times. . . . [He is] a leisurely, soulful storyteller, a reporter with a poet’s eye, and an appreciative diner. Most of all . . . he’s a ferociously devoted son.” —The Christian Science Monitor

“An engaging read about food that is dear to me.” —Hugh Acheson, Food & Wine

“Many of the tales Bragg tells are ones he remembers hearing from his family, which must have been full of the best storytellers of all time. . . . [The Best Cook in the World] winds through family stories, memories of his mother and recipes of their food.” —Post and Courier (Charleston)

“[Bragg] generously preserves a way of life that has endured in America’s backcountry. His prose evokes the sights, sounds, and smells of a rural Alabama kitchen and transforms apparent poverty into soul-satisfying plenty.” —Booklist (starred review)

“One of the finest American writers of our time.” —Billy Watkins, The Clarion Ledger (Jackson, MS)

“Bragg writes with a powerful, page-turning punch. The result is unimaginably delectable.” —BookPage

“The Best Cook in the World is a cookbook, but not like one of those old Betty Crocker volumes. . . . Bragg’s work is more a narrative cookbook that’s heavy on stories about growing up poor, wearing out stoves and the role food plays both in his family and his native South, which gets a little more like everywhere else each time Domino’s delivers a pizza out in the county.” —Associated Press