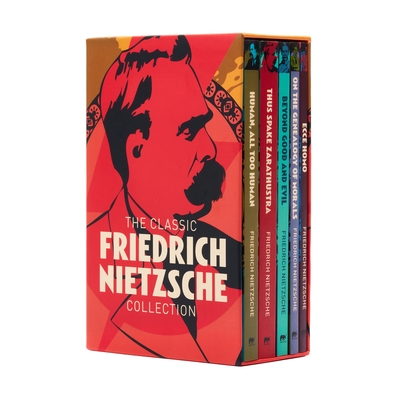 One of the most prominent thinkers of the 19th century, Nietzsche was a cultural critic and philosopher whose theories on truth, morality, nihilism and the meaning of existence have had enormous influence on Western philosophy. This box set contains his most prominent works, including: - Human, All Too Human
- Thus Spake Zarathustra
- Beyond Good and Evil
- On the Genealogy of Morals
- Ecce Homo These influential essays have profoundly shaped modern philosophy and remain as pertinent now as they ever were. ABOUT THE SERIES: The Arcturus Classic Collections series features delightful, high-quality paperbacks of classic works of literature with striking contemporary cover designs, presented in a decorative box set.

Friedrich Nietzsche (1844-1900) was one of the most influential German philosophers. The youngest man ever to hold the Chair of Classical Philosophy at the University of Basel, his work has inspired generations of philosophy by providing radical challenges to the received wisdom of earlier generations.