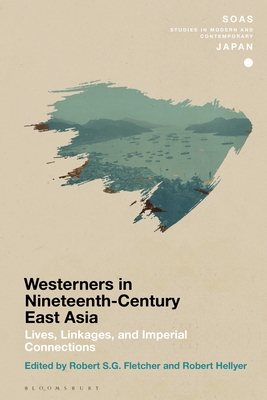 This book presents intimate, engaging, and largely untold portraits of Western lives and livelihoods in Japanese and Chinese treaty ports, as well as in the British colonies of Hong Kong, Australia and New Zealand, during the 19th century. It does so by examining how Westerners 'chronicled' their overseas lives in personal letters, diplomatic dispatches, business records, and academic papers. By utilizing these rich but often overlooked sources, Chronicling Westerners in Nineteenth-Century East Asia presents new insights into the pace and challenges of daily life, especially in the Japanese treaty ports of Nagasaki and Yokohama but also in Shanghai and Hong Kong. In the process, the volume stresses the 'connectivities' between its subjects, as Westerners' lives intersected, and as they moved between Japanese and Chinese port cities.

Contributors based in the USA, Japan, the UK, New Zealand and Switzerland reveal the various commercial, maritime, and imperial connections, linked in surprising ways to Westerners in East Asia portrayed here, which shaped colonial development in Australia and New Zealand. Through a broad investigation of Westerners recording their lives, the book re-examines wider histories of the so-called 'openings' of China and Japan in the 1850s and 1860s, as well as how Westerners sought to make sense of these events, and to narrate their place within them. Finally the volume considers how flows of people, capital, commerce, and communications not only cut across the histories of distinct treaty ports in Japan and China, but also shows their implications for empire and exchange beyond East Asia, including Australia, New Zealand, and the 19th-century maritime world.

Robert S.G. Fletcher is Professor of History and Kinder Institute Professor of British History at University of Missouri, USA. He is the author of British Imperialism and 'The Tribal Question': Desert Administration and Nomadic Societies in the Middle East, 1919-1936 (2015) and The Ghost of Namamugi (2019). Robert Hellyer is Associate Professor of History at Wake Forest University, USA. He is the author of Defining Engagement: Japan and Global Contexts, 1640-1868 (2009) and the co-editor, along with Harald Fuess, of The Meiji Restoration: Japan as a Global Nation (2020).