The Immanence of Truths: Being and Event III (Hardcover) 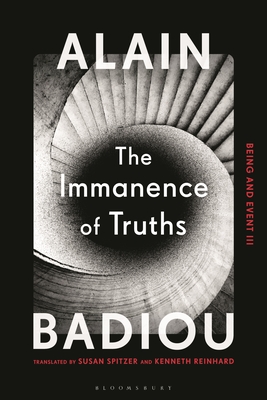 The Being and Event trilogy is the philosophical basis of Alain Badiou's entire oeuvre. It is formed of three major texts, which constitute a kind of metaphysical saga: Being and Event (1988). ), Logics of the Worlds (2006) and finally The Immanence of Truths, which he has been working on for 15 years.

The new volume reverses the perspective adopted in Logics of Worlds. Where in that book, Badiou saw fit to analyze how truths, qua events, appear from the perspective of particular worlds that by definition exclude them, in The Immanence of Truths Badiou asks instead how the irruption of truth transforms the worlds within which they by necessity must arise. An emphasis on regularity and continuity has given way to an attempt, one unquestionable in its philosophical power and implications, to formalize rupture and reconfiguration. The Being and Event trilogy is a unique and ambitious work that reveals how truths can be at once context-specific and universal, situational and eternal.