I Kick and I Fly (Hardcover) 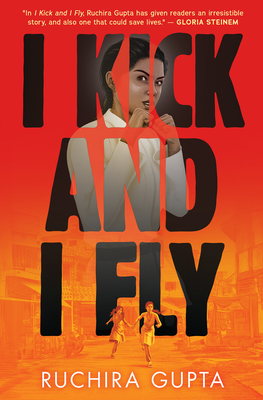 "Any work from Ruchira Gupta is sure to further the cause of liberating women, especially, and in this novel, girls. It takes a strong belief in us, and especially in our young ones, to persevere as she does in both art and politics." Alice Walker, author of The Color Purple​​​​​​​

A propulsive social justice adventure by renowned activist and award-winning documentarian Ruchira Gupta, I Kick and I Fly is an inspiring, hopeful story of triumph about a girl in Bihar, India, who escapes being sold into the sex trade when a local hostel owner helps her to understand the value of her body through kung fu.

On the outskirts of the Red Light District in Bihar, India, fourteen-year-old Heera is living on borrowed time until her father sells her into the sex trade to help feed their family and repay his loans. It is, as she's been told, the fate of the women in her community to end up here. But watching her cousin, Mira Di, live this life day in and day out is hard enough. To live it feels like the worst fate imaginable. And after a run-in with a bully leads to her expulsion from school, it feels closer than ever.

But when a local hostel owner shows up at Heera's home with the money to repay her family's debt, Heera begins to learn that fate can change. Destiny can be disrupted. Heroics can be contagious.

It's at the local hostel for at risk girls that Heera is given a transformative opportunity: learning kung fu with the other girls. Through the practice of martial arts, she starts to understand that her body isn't a an object to be commodified and preyed upon, but a vessel through which she can protect herself and those around her. And when Heera discovers the whereabouts of her missing friend, Rosy, through a kung fu pen pal in the US, she makes the decision to embark on a daring rescue mission to New York in an attempt to save her.

A triumphant, shocking account inspired by Ruchira Gupta's experience making the Emmy-award winning documentary, The Selling of Innocents, this is an unforgettable story of overcoming adversity by a life-long activist who has dedicated her life to creating a world where no child is bought or sold.

Ruchira Gupta is a writer, feminist campaigner, professor at New York University and founder of the anti-sex-trafficking organization, Apne Aap Women Worldwide. She won the Clinton Global Citizen award in 2009, the Sera Bangali Award in 2012 and an Emmy for outstanding investigative journalism in 1996. She has helped more than twenty thousand girls and women in India exit prostitution systems. She has also edited As If Women Matter, an anthology of Gloria Steinem’s essays, and written manuals on human trafficking for the UN Office for Drugs and Crime. Ruchira divides her time between Delhi and New York. I Kick and I Fly is her debut novel.

"In I Kick and I Fly, Ruchira Gupta has given young readers an irresistible story, and also one that could save lives. This book is a gift." -- Gloria Steinem

"Any work from Ruchira Gupta is sure to further the cause of liberating women, especially, and in this novel, girls. It takes a strong belief in us, and especially in our young ones, to persevere as she does in both art and politics. The absolute belief that if the heart is moved, so might be the positive activities for justice and freedom, of the mind." -- Alice Walker, author of The Color Purple

"I Kick and I Fly is a powerhouse of a debut. Ruchira Gupta has crafted a page-turner of a read, stepped in place and full of indelible characters, managing to be at once propulsive and enlightening, infuriating and inspiring. But maybe most important, Heera’s story is a beacon of hope to a generation of young people trying to transform an unjust world." -- Gayle Forman, New York Times bestselling author of If I Stay and We Are Inevitable

"Having been to the brothels and red-light district I Kick and I Fly so searingly captures, I can testify that this book is essential reading for anyone interested in how to empower girls to break free from intergenerational prostitution and sex trafficking. Ruchira Gupta is nothing less than a great hero, and in her book, she has created one in Heera, as she seeks to defy the destiny of rape that poverty and men have assigned her." -- Ashley Judd