Armadillo and Hare: Tales from the Forest (Hardcover) 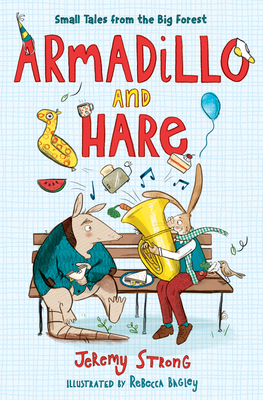 By Jeremy Strong, Rebecca Bagley (Illustrator)
$16.99
On Our Shelves Now

In the tradition of Cynthia Rylant and Arnold Lobel comes an utterly charming, hilarious, and heartfelt story of unlikely animal friendship and the differences in all of us, told with wit and wisdom.

Over the course of these ten stories of friendship, Armadillo and Hare will learn some very important lessons:

- Exercise is important for Armadillos, but so are cheese sandwiches.
- Big animals like jaguars and small insects get lonely too...and might just be the best of friends.
- Elephants can cause more damage than thunderstorms.
- You can still host a forest birthday party even if it's nobody's birthday, as long as everyone is invited.

Filled with stunning illustrations by Rebecca Bagley, this is a book to be read over and over again.

Many years ago, Jeremy made his first attempt at writing some stories about a small group of animals. They never made it further than his typewriter (laptops hadn’t yet been invented). Forty years later he decided it was time to try again, and a new pair of friends, Armadillo and Hare, came alive. He wanted these tales to be different from his usual comic style, and they are! Jeremy is the bestselling author of over 100, including The Hundred-Mile-an-Hour Dog and My Brother’s Famous Bottom series.


After Graduating WITH a BA in Graphic Communication, Rebecca meandered pretty quickly into kids' publishing as an assistant designer… and just didn’t leave. She is a freelance illustrator and part-time designer working in kids' publishing, currently based in Bath, England. Rebecca was awarded the Cheltenham Illustration Award in 2016 and has provided editorial illustrations for a number of publications, including Stew, Ithsmus, and Union Features as well as The London Museum.

Praise for Armadillo and Hare:

"Strong is excellent on friendship dynamics." -- The Times (UK), Book of the Week

"Strong has unleashed his whimsical side with this quirky collection of stories" -- Sunday Times (UK), Book of the Week

"Armadillo and Hare is full of the gentle humor and philosophy of Winnie the Pooh." -- BookTrust (UK)