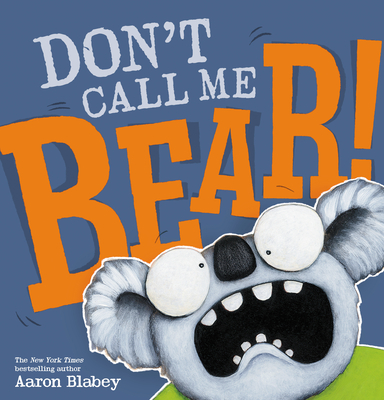 By Aaron Blabey, Aaron Blabey (Illustrator)
$14.99
On Our Shelves Now - Please allow up to 48-hours for Curbside Pickup orders to be processed.

Koala is NOT a bear! (Or is he?) Find out why Koala is so mad in this new, irresistibly funny picture book from Aaron Blabey, the bestselling creator of Pig the Pug!
"G'day, my name is Warren and I've got something to share... Just because I'm furry DOESN'T MEAN THAT I'M A BEAR."

Koala is sick of being called the wrong thing. Koalas are NOT bears, and it is time that everyone knows it! Follow this feisty little koala as he explains why he is certainly NOT a bear (and why no one ever seems to believe him).

Rich with author-illustrator Aaron Blabey's hysterical text and unforgettably wacky illustrations -- plus nonfiction facts woven throughout -- Don't Call Me Bear! is a hilarious story about making sure everyone knows exactly who you are!

AARON BLABEY has written many well-loved, bestselling books for children. He is the creator of three hugely successful series for children -- the New York Times bestselling The Bad Guys, Pig the Pug, and Thelma the Unicorn. In 2018, it was announced that a movie adaptation of The Bad Guys is in development at DreamWorks Animation with Aaron serving as an executive producer on the project. Aaron's books have won many awards, including nine REAL Awards, an INDIE Book Award for Children's Book of the Year, a Children's Book Council of Australia -- Book of the Year Award, a NSW Premiers Literary Award for Children's Literature, two Australian Book Design Awards, and a Children's Peace Literature Award.

"The Aussie voice is bouncy and the rhyming couplets entertaining . . . Warren's extreme opposition to being referred to as a 'koala bear' will make viewers laugh, and maybe they'll learn something about koalas, too." -- The Bulletin of the Center for Children's Books


Praise for Pig the Winner:

"The goggle-eyed cartoon illustrations are fun, funny, and appealingly grotesque in their exaggerated goofiness, and they are a good match for the rhyming text." -- Kirkus Reviews


Praise for Pig the Pug: