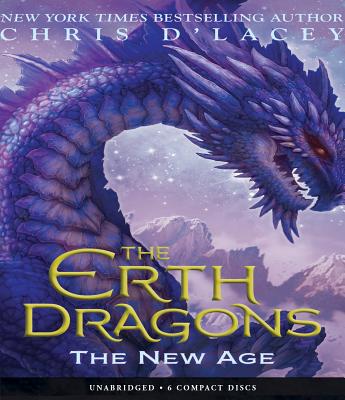 This is book number 3 in the The Erth Dragons series.

New York Times bestselling author Chris d'Lacey spins the epic conclusion to his saga of the original clash between humans and dragons.
From Erth to the dragon homeworld, Ki:mera, everything has been forever changed by the meeting of dragons and humans. Their fate has become inextricably intertwined -- and their story will transform the very fabric of time.

Ren, the human boy, now has unprecedented powers. With his control of a magical horse, his abilities scare even the most formidable dragons.

Yet the dragons fear even more the rise of the dark dragon Graven, and rumors that the dragons who came first may have known more than anyone realized run rampant through the wearle. As the implications of the dragons' colonization expand, new creatures are drawn into the conflict, and Gabrial and Grendel will travel beyond the ends of the Erth to save their two young wearlings.

Chris d'Lacey is the author of several highly acclaimed books, including the New York Times bestselling Last Dragon Chronicles series; the Dragons of Wayward Crescent series; the UNICORNE Files trilogy; and The Erth Dragons series, The Wearle, Dark Wyng, and The New Age. Chris lives with his wife, Jay, in Devon, England, where they are at work on his next book.

"This second book in the Erth Dragons series offers readers more of the same high fantasy, rich language, and compelling action scenes... the key is Ty, whose character and motives are cleverly unveiled bit by bit." -- Booklist


Praise for The Wearle (The Erth Dragons #1):

"The creative spin on the intersection of dragon history and prehistoric humans is interesting and the action engaging." -- Kirkus Reviews

"A rousing adventure with sweeping aerial action scenes and a tense mystery at its center." -- Publishers Weekly

Praise for the UNICORNE Files series:

"Will hook readers from page one and won't let up until the dramatic conclusion. D'Lacey manages to make the implausible seem possible." -- School Library Journal

"A lively and enjoyable read." -- Bulletin of the Center for Children's Books

"A quest laden with suspense and action... Will leave readers wanting more." -- Booklist


Praise for the Last Dragon Chronicles:

"Chris d'Lacey's writing is sometimes exciting and sometimes silly. But that seems in keeping with the worlds he created -- one that seems almost real and one that is beyond imagination." -- The Washington Post

"D'Lacey's characters are realistic and engaging... A page-turner." -- The Horn Book