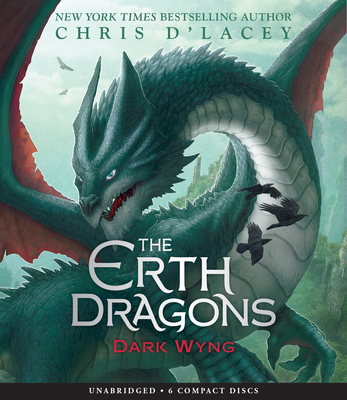 This is book number 2 in the The Erth Dragons series.

The dragon Wearle is in turmoil: A human boy named Ren has bonded with a pair of baby dragons, and their connection has given him shocking and extraordinary new powers. Though some of the dragons suspect he is plotting against the Wearle, his dragon allies will do anything to save him. But Ren has an agenda of his own.

Meanwhile, after the devastating war with the dragons, the humans, or Kaal, have accepted the leadership of a mysterious stranger. The man, who calls himself Tywyll, has an affinity for crows and rides a remarkable unicorn. The band of followers that accompanies him into dragon territory has no idea the danger they're inviting.

Though the dragons and the Kaal are dead set against each other, both will face down an ancient power stronger than any of them can imagine.

Chris d’Lacey is the author of several highly acclaimed books, including the New York Times bestselling Last Dragon Chronicles series; the Dragons of Wayward Crescent series; the UNICORNE Files trilogy; and The Erth Dragons series, The Wearle and Dark Wyng. Chris lives in Devon, England, with his wife, Jay, where they are at work on his next book.

"The creative spin on the intersection of dragon history and prehistoric humans is interesting and the action engaging." -- Kirkus Reviews


Praise for the UNICORNE Files series:

"Will hook readers from page one and won't let up until the dramatic conclusion. D'Lacey manages to make the implausible seem possible." -- School Library Journal

"A lively and enjoyable read." -- Bulletin of the Center for Children's Books

"A quest laden with suspense and action.... Will leave readers wanting more." -- Booklist


Praise for the Last Dragon Chronicles:

"Chris d'Lacey's writing is sometimes exciting and sometimes silly. But that seems in keeping with the worlds he created -- one that seems almost real and one that is beyond imagination." -- The Washington Post

"D'Lacey's characters are realistic and engaging.... A page-turner." -- The Horn Book