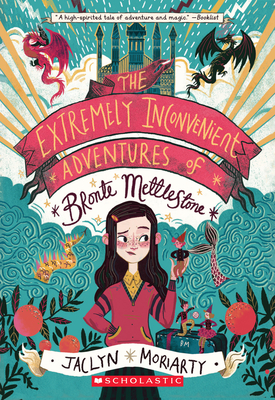 By Jaclyn Moriarty
$8.99
On Our Shelves Now

Now in paperback, Jaclyn Moriarty returns with her first middle-grade novel, a buoyantly high-spirited fantasy adventure.
Bronte Mettlestone is 10 years old when her parents are killed by pirates.

This does not bother her particularly: Her parents ran away to have adventures when she was a baby. She has been raised by her Aunt Isabelle, with assistance from the Butler, and has spent a pleasant childhood of afternoon teas and riding lessons. Now, however, her parents have left detailed instructions for Bronte in their will. (Instructions that, annoyingly, have been reinforced with faery cross-stitch, which means that if she doesn't complete them, terrible things could happen!) She travels the kingdoms, perfectly alone, delivering gifts to 10 other aunts: a farmer aunt who owns an orange orchard, a veterinarian aunt who specializes in dragon care, a pair of aunts who captain a cruise ship, and a former rock star aunt who is now the reigning monarch of a small kingdom.

But as she travels from aunt to aunt, Bronte suspects there might be more to this journey than the simple delivery of treasure.

Jaclyn Moriarty is the award-winning author of A Corner of White, The Cracks in the Kingdom, A Tangle of Gold, The Year of Secret Assignments, The Murder of Bindy Mackenzie, The Ghosts of Ashbury High, and The Spell Book of Listen Taylor. A former media and entertainment lawyer, Jaclyn grew up in Sydney, Australia, lived in the United States, Canada, and UK, and now lives in Sydney again. She is very fond of chocolate, blueberries, and sleep.

Praise for The Extremely Inconvenient Adventures of Bronte Mettlestone:

* "[A] highly entertaining and brilliantly plotted fantasy... With its storytelling aplomb, humor, imagination, and many twists and turns, this novel places Moriarty... firmly in Diana Wynne Jones territory. Readers will want to begin rereading this spellbinder just as soon as they finish it, to find all the clues and connections and coincidences Moriarty drops and weaves and reconciles throughout." -- The Horn Book Magazine, starred review

"Her eventful story, seemingly as delicate as gossamer, yet strong as silk, is well structured and entertaining. An episodic, high-spirited tale of adventure and magic." -- Booklist

"This quirky and endearing adventure set in a captivating, off-beat world is an excellent purchase wherever fantasy circulates well." -- School Library Journal

"[A] delightful book... The author does a wonderful job crafting this fantasy story to make it believable with word play, figurative language, and imagery. Readers will be drawn in with likeable, unforgettable characters and nonstop action... This title would make a great addition to any school or classroom library and would be a great read aloud." -- School Library Connection


Praise for A Tangle of Gold:

* "A breathless and exhilarating race to the finish... with a variety of unexpected revelations and marvelous surprises, and with [Moriarty's] usual perfect timing." -- Horn Book, starred review

* "The magic continues to be refreshingly inventive, and the world-building is so precise... This final installment will garner even more followers." -- School Library Journal, starred review

* "Startling and clever... A breathtaking climax... An eminently satisfying conclusion." -- Bulletin of the Center for Children's Books, starred review


Praise for The Cracks in the Kingdom:

* "Madcap, whimsical, smart and even heartbreaking... Even better than the first." -- Kirkus Reviews, starred review

* "Readers will be clamoring for the next title after the thrilling yet satisfying conclusion." -- School Library Journal, starred review


Praise for A Corner of White:

"A marvelous novel -- in every sense of the word... A Corner of White slips
through a previously unnoticed crack in the reader's heart and changes everything." -- Deborah Harkness, New York Times bestselling author of A Discovery of Witches

* "[A] genre-blending feat of stylistic energy... The plotting is as innovative and
riveting as the world-making." -- Bulletin of the Center for Children's Books, starred review