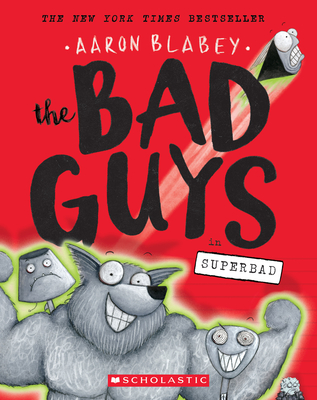 By Aaron Blabey
$5.99
In Stock Now - Click Title to See Store Inventory. Please allow up to 48-hours for Curbside Pickup orders to be processed.

This is book number 8 in the The Bad Guys series.

The Bad Guys have strangely acquired SUPERPOWERS! But their powers might be, well, defective. They can only do things like blow their own pants off in public. Not exactly what you'd call hero-caliber skills.

Defective or not, the Bad Guys have a job to do. With Dr. Marmalade ready to destroy the world, Mr. Wolf, Mr. Snake, Mr. Piranha, and Mr. Shark finally have their chance to be (super)heroes! And this time, they may just get some help...

Aaron Blabey has written many well-loved, bestselling books for children. He is the creator of three hugely successful series for children -- the New York Times bestselling The Bad Guys, Pig the Pug, and Thelma the Unicorn. In 2018, it was announced that a movie adaptation of The Bad Guys is in development at DreamWorks Animation with Aaron serving as an executive producer on the project. Aaron's books have won many awards, including nine REAL Awards, an INDIE Book Award for Children's Book of the Year, a Children's Book Council of Australia -- Book of the Year Award, a NSW Premiers Literary Award for Children's Literature, two Australian Book Design Awards, and a Children's Peace Literature Award.

* "This book instantly joins the classic ranks of Captain Underpants and The Stinky Cheese Man.We challenge anyone to read this and keep a straight face." -- Kirkus Reviews, starred review